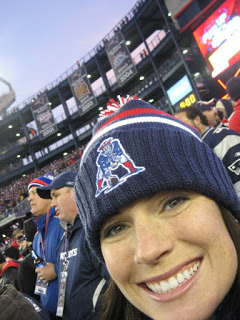 I like football, I honestly do.
It comes in handy since I live in New England. Patriots games, since the beginning of the Belichick/Brady era, are like holidays in this area. If you’re from my special region in our great country you know exactly what I mean. Now, one can debate about the Red Sox or the Pats being more popular in New England; but, either way, you can rest assured that every Sunday, from September to January, supermarkets are abandoned, there are few cars on the roads, and people are at home with their loved ones tending to their football traditions.
Having performed in my high school and college marching bands, I have a great understanding of the sport. I got a chance to watch every football game on either friday and/or saturday for eight years.  So, now I apply my knowledge to Sunday. I know who most of the players are, understand their positions, what most penalties are, and especially love getting together with friends to watch the games.
My hubby loves football.  And when I say “loves,” I mean that it borders on almost inappropriate. I only wish he knew half as much about birthing a baby than what he does about football.  Seriously, he can name who was the AFC MVP in 1998 without missing a beat, or what college has produced the most first round draft picks in all of the NCAA.  (Well, to be honest, if you want to talk to me about Wes Welker’s cute butt, –mmmm those silver pants– then I’m all ears).  But, as much of nerd as he is about his beloved NFL, and despite the fact that I sometimes refer to myself as a “football widow,” I actually think it’s kinda cute. I’m not sure if I have ever loved something as much as he does football for that many years. So, I do my best to enjoy the game as much as he does.
I make buffalo chicken dip, throw on a sweatshirt, or my handy dandy Welker jersey, crack open my favorite bottle of Sam Winter (pre Itty Bitty days, but bet your bottom dollar that it’s coming back when the kid’s out) and bundle up to watch our boys take the field. I cheer on my favorites, worry about the athletes when they get injured, and reprimand the referees from the comfort of my own home. 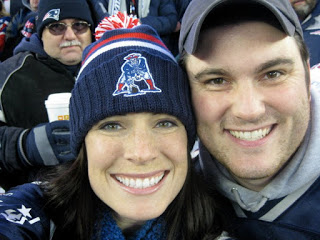 But I do not love football.  Not anymore.

Reason being, I can’t stand it when they lose.  Yes, it’s disappointing to see Brady and co. get spanked by the Ravens like they just did in the AFC championship (getting completely shutout in the second half? Really?).  But, that’s not really my huge problem or why I hate when they lose.

When the Patriots come up short, my adorable husband’s smile that you see pictured on the left, turns into a wretched scowl. He stops interacting with our friends, ceases any eating of my carefully crafted buffalo chicken dip, and marches off to our bedroom to pout.  Honestly, he turns into such a little baby about the whole deal.

I remember when the Pats lost the Superbowl in 2011 – we were in our basement, and right before the game ended, Blake swiftly turned off the TV without saying a word. There was no, “hunny, this just ain’t working for me anymore,” or, “my darling wife, would you mind if we not watch the rest of the game?” in his dulcet Boston accented tones.  Nope, not even a grunt.  He just snatched the clicker and turned it off.  I was knitting and not saying much because I just knew that it was going to get ugly in casa de Larsen.  We literally sat in complete silence for over twenty minutes with him staring blankly at a black screen.  I could just hear Blake getting angrier.  So I let it go, and the only thing he begrudgingly said to me was, “I love you so f’n much” right before we went to bed.  See?  A complete baby sometimes.

I love my husband, I really do.  He’s cute.  After a football loss, however, he turns into an absolute grouch and he’s not so cute.  It generally takes two or three days for him to snap out of it and to come back to normal.  He does this really funny thing where he has to purge all sports for the next few days.  No sports radio.  No ESPN (thank god), and no talking with friends about the game.  He just goes into his own world.  The poor thing just takes it so personally.

The good news is that we can watch the Superbowl in peace this year.  Yes, it sucks the Patriots aren’t in it, but it’s all ok in my book.  Blake is in the middle of his self imposed sports purge and the air is becoming a little lighter in our place.  Best of all, my hubby will not become a grouch, nor will we have to stay home (which is one of his many superstitions when the Patriots play.)  We’ll actually get a chance to socialize with our awesome friends finally!  Yay!  So, in the end, all will be well with my life now that the Patriots are out of the playoffs – well, except for a couple things – I won’t be able to watch Wes’ cute butt anymore, and the Red Sox season starts in March.  And, as bad as Blake is with the Pats, the Sox are a whole new bag of issues with which I have to deal.

I love him so very much.

2 Comments on I Really Hate When The Patriots Lose