What sippy cup is best? Are straw baby bottles better? How do you teach your baby to drink out of a cup? I may not know the answers to all of those questions, but I do know that Itty Bitty has become a straw officiando thanks to the Zoli Bot!

Ever since our Itty Bitty was six months old, we started giving him solids for his meals, in addition to a cup of water. Even if he didn’t know how to work the cup, or if very little water was actually ingested, I wanted him to eventually how to learn how to drink out of something other than just a bottle.

Some training cups require little ones to almost bite the tip as they suck, and this is not a behavior I would personally like to see my Itty Bitty get in the habit of, if you get my drift. Ouch.

Other cups would just leak straight into his mouth, which, honestly, wouldn’t teach him anything either. Naturally, instead of being hydrated child, Itty Bitty wound up being sopping wet, confused, and turned off at the whole idea of drinking water altogether.

Then, the Zoli Bot was recommended to me. At first, I was hesitant, because it costs a bit more than your average sippy cup. A cost to the tune of about twelve dollars. Yeah, I know. Kids are expensive little buggers.

But, then – I learned why this cup’s price tag was worth it.

The Zoli Bot has a flexible soft straw, which is actually weighted at the bottom – so no matter what angle my tiny baby turned the cup – he was able to drink his beverage to the very last drop! That flexible straw, through some kind of crazy voodoo magic made it easier for Itty Bitty to get the concept of sucking a straw. (Don’t ask me how, because I am neither smart enough to figure it out, nor am I gifted enough to write it down.) But, it worked like a charm. 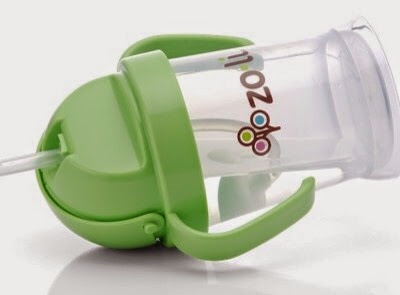 Other straw cups are hard, and often encourage biting to drink the enclosed liquid. What’s worse is that those cups usually needed to be held perfectly upright if the child actually intended on getting anything to drink. Trust me, I’m barely coordinated enough to drink from one of those style cups, so why should I expect my itty bitty to do so? 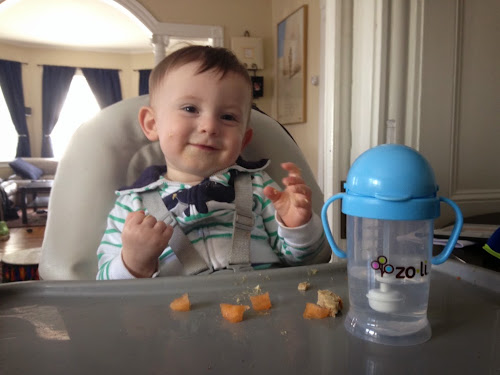 The Bot is non-toxic, BPA and Pthalate free. I don’t even know what all of that means, but I know its good. Best yet, you can put the whole thing in the dishwasher. Bam!

Like with most all things baby, you cannot microwave the Bot. There is metal in the weighted bottom and that could prove to be a little messy for the cup, and the microwave. Carbonated beverages inside of the Bot is also a no-no. But, really, who’s feeding their ten month old Dr. Pepper anyway?

If there is one perceived drawback to the Zoli Bot, it’s keeping it clean. It seems a little complicated, and, admittedly, it’s not immediately straightforward on how to wash it. But, for all of you out there who suffer from not being able to wash the cup, have no fear. You can either throw it in the dishwasher, or wash it in the sink. I like to close the lid shut, fill the cup up with super hot soapy water, and shake the cup so it’s pressurized. Then I flip the lid back and the soapy water is pushed up through the straw. I repeat this process with hot soap-free water. Tada!

Zoli Bots come in a variety of colors, and Zoli also sells a replacement straw and brush cleaner set. 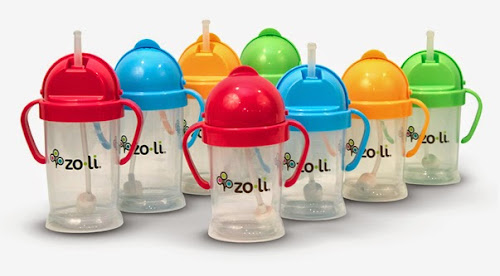 It only took Itty Bitty two days to become proficient at drinking out of this cup. Since his experience with the cup, he’s finally grasped the concept of how to draw liquid from real straws! Of course, it’s a little different than the bot because more flow comes from a real straw, but he is finally capable of drinking out of a sippy-style cup. In fact, I actually learned the hard way when he started drinking some of my Dunkin Donuts iced coffee.

Of course, the kid skipped all his naps that day. Ooops. I’m an awesome mom, right?

Nonetheless, we have been able to take our baby out to restaurants, order food off of the regular menu thanks to baby led weaning, and ask for a kids cup full of water with a straw and no ice. He drinks it like a champ – as long as we assist him with holding the cup. Every baby is different, so this cup may or may not work for you. But, here’s my advice: register for one of the cups for your shower and add it to your arsenal of bottles and cups to try out. Who knows, maybe your tiny baby will enjoy the Zoli Bot as much as mine does! (Yes, that is a hair brush in his other hand. For some reason that is his toy of choice.)
So here’s my next question for you – how did you transition your baby from a bottle of milk to a cup of milk?