Tim Tebow signed a deal with TiVo, Tom Brady with anyone who pays…professional athletes don’t just love the game, they also love the pomp and circumstance. Who can blame them, right?

Sometimes though, I just want an athlete who pushes the boundaries, even when there aren’t any screaming fans around. Give me someone passionate, strong, and determined, and a huge Harry Potter fan!

The sport of Muggle Quidditch has quickly taken my heart. So much so, that I will be going to the Northeast Regional Tournament this weekend.  25 collegiate teams from the Northeast played at Fort Adams in Newport. It was brilliant.

The castle like fortress of Fort Adams served as a perfect backdrop for this once magical game.  Incredible athleticism was displayed, all the while the players were running on a broom. 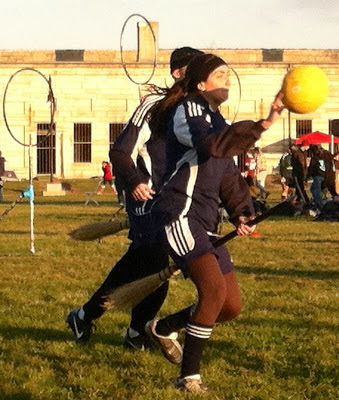 My friend and I, as well as two preteens, attended the event. We were dressed in our finest Harry Potter gear, myself wearing a crocheted lion hat – which I pretend to be like Luna Lovegood’s.  Food and beverages were for sales, as well as fun swag from the IQA – the International Quidditch Association. The tournament was a weekend long event, and teams came out dressed in real uniforms. There were referees, official quidditch brooms and hoops. We were even able to see Middlebury, pretty much the quidditch version of the Yankees, lose a game!

I was able to attend the World Cup last year, and am unable to this year because it is taking place in Orlando.  Maybe I’ll go next year, along with a budding quidditch player.

I am amazed that a sport dreamt up by JK Rowling for her fictional books, has now become an international sensation. I’m also slightly jealous that it wasn’t around when I was attending the University of Rhode Island.

Hopefully the NE Regional Tournament is back at Fort Adams next year! I’ll most certainly be back.