In the earlier months of my pregnancy, we have been referring to our baby as an “it” because we didn’t know if itty bitty baby was a boy or a girl.  Many friends would make their own guesses – by taking a look at my face, my belly, and asking me some fun questions.  Old Wives’ Tales and pregnancy myths  are just that – tales and myths – but they do make you wonder.  Are they at all true? 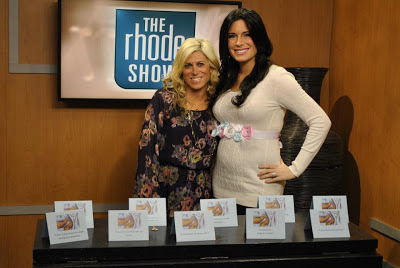 Mom Generations & rhodymamas blogger, the lovely and talented Audrey McClelland, visited The Rhode Show to ask me some common pregnancy myth questions.
Here were the questions I was asked:
1. If your husband puts on weight during your pregnancy, then you will be having a girl. If he doesn’t put on a pound, then you’re carrying a boy.  Blake gained some weight with me on our babymoon.

2. If you can’t get enough chocolate, you could be having a girl. I haven’t been craving chocolate at all

3. If you can’t get enough sour foods, you could be having a boy. Sour patch kids, however, have been a candy of choice

4. If you’re having a girl, then the fetal heart rate will be above 140. A boy will have a heart rate below 140. Our itty bitty baby has generally above 140

5. Some say that the shape and fullness of your face during pregnancy can indicate your baby’s sex, if people tell you that because your face is round and rosy you are having a girl. Most people say my face hasn’t changed a bit

6. Do you have pregnancy acne? Some believe that getting acne during your pregnancy indicates you’re carrying a girl. Acne and then some, YUCK!

8. The worse the morning sickness, the more likely it is you’re having a girl. No morning sickness (but I was tired and cranky in the evenings)
9. Has your leg hair been growing faster?  If so, it’s a boy. I am one hairy mom! I should have taken stock in razors…