Maybe I was traumatized when I was a child, because I can never remember being okay with the sight of my own blood. 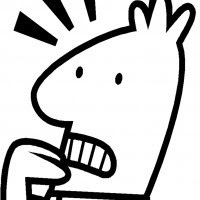 When I was eleven I was hit by a car and rushed to the local hospital. Although I wasn’t bleeding in any significant manner, I still remember the doctors and nurses talking about blood, and how there was a big mess outside my hospital room from someone else. They were worried my parents would see it and think the blood was mine. (Quick aside: what the heck kind of injury would make all that blood and why would it just be strewn about the hallway? I may be older, but I am pretty sure janitors existed even then.) Anyway, when I think about it now, I always picture the amount of blood spatter you would find in The Walking Dead.

Later on, after hours of x rays, I was given morphine to help dull the pain of my badly broken leg. The morphine did little to help, but, boy, did it make me incredibly loopy. I starting seeing things, hearing things, and just felt real funny. (See: David Goes To The Dentist) I don’t understand why anyone would want to do it recreationally. It just messes with you. Anyhow, ever since, I’ve hated blood, needles, and IV’s.

If someone else is bleeding, I can jump to the rescue. Trust me, I was an RA at URI, I’ve seen my fair share.

But, if it is my own, I cry like a two year old, want to vomit, sweat, overheat, and have to be locked in my chair for fear of fainting. While in college, the nurses at the URI clinic knew I was such a pain that they would give me a Popsicle to distract me during the blood drawing process. Like that worked…it would be like giving a band aid to a guy when his leg that got cut off. Suffice it to say, my fear has not gotten any better with age. If anything, it just gets worse.

Ever since I found out I was pregnant, I’ve had to have a series of blood tests. My initial test was to confirm I was pregnant, and I was not prepared. The woman had a difficult time getting to my vein, and wasn’t sweet or kind. I warned her that I needed help, and that I couldn’t make a fist. My mind paralyzes the arm, and I’m pretty much a limp fish.

I stared off at the wall, looking at a disgusting medical picture (they really need prettier things to look at in blood work rooms by the way) and began to feel the needle prick and the mean lady searching for my vein. I focused on my breathing, but began crying, and kindly asked the woman if she could talk to me while she drew the blood.

Her voice was like that of Bart Simpson’s Aunt Selma.

“Dis your first baby?”
“Yes.” I croaked out, excited that she may talk about how beautiful this stage in my life would be!
“Well get used to having your blood taken, it’s gonna happen a lot.”

And with that, she removed the needle, and I removed myself from the room with a serious chip on my shoulder. I called my lovely hubby, and told him that from here on out, he needed to accompany me to any and all doctors appointments. I needed a cheerleader, and someone to hold my other hand.
Since that first experience, things have gotten better. My hubby brings skittles to each appointment requiring bloodwork. Granted, his bedside manner can still use improvement – he holds my hands, stares at the needle and just waits. Of course, each time I have to remind him to look at me and distract me, and he generally talks about the latest Patriots game, or how Bobby V got fired, or the latest PJD motorcycle on American Chopper.

True, I may have chosen a different topic, and to be fair, I do put him on the spot. I think that’s just how a guys brain works. The first thing they usually think of is sports or motorcycles when they need to talk about something out of necessity. But, one things for certain – as silly and useless as his topics may be, he definitely helps me get through what is generally a terrifying process. I still cry, and my arm is still limp, but I have gotten much better. I don’t feel the need to punch Selma in the face anymore 🙂

I only have a few more months to go in my pregnancy, but I know all of this bloodwork will be worth it. This itty bitty baby is making me stronger, in more ways than one.