*Disclaimer: This guest post is written by Tall Dad. The following article is Rated R, and is not representative of Mary Larsen’s thoughts or values.  She is not liable for the views expressed in the following commentary. Chances are, however, that if you’re reading this, regardless of your tastes, we probably have at least one thing in common – we’re both parents. And you know, just as well as I, that being a parent, either new, or grizzled veteran, is tough on anyone. So, take whatever you like from this article – good, bad, or ugly – and try to enjoy. 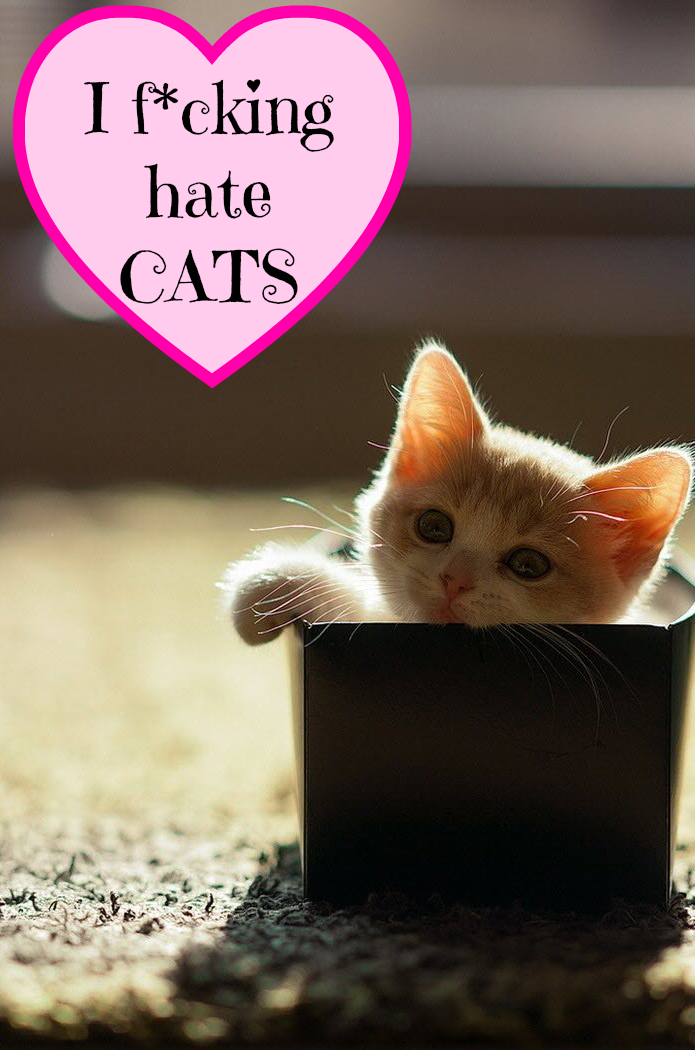 Hate them.  Hate them like Niki Minaj hates Mariah Carrey.

Someone once shared a very wise saying with me, “dogs have owners and cats have staff.”  And they’re right.  Cats don’t give two shits about you.  They don’t give back. They’re happy doing their own thing while dogs are loyal, loving, and most of all….obedient.

You see, I’ll pretty much do anything as long as it makes Tall Mom happy.  I’m that kind of a guy/pushover.  It’s ok.  I’ll admit that she has some mystical power over me like she’s the One Ring screwing with Frodo in The Lord of the Rings.  (I hate Elijah Wood almost as much as cats btw)

On Memorial Day Weekend, Tall Mom asked me to get a Terrarium.  If you know anything about Tall Mom, you know that she is the absolute worst thing to happen to any form of plant since the advent of the Atom Bomb.  She killed bamboo for Christ’s sake!  Who the hell kills bamboo?  It’s fucking impossible.  So, there was no way I was going to waste however much it costs to get that piece of garbage Terrarium.  It would have been dead in a week.  Probably less.

Credit must be given, however, to where it is due.  Tall Mom has managed to keep Itty Bitty alive for a full year.  This bout of recent fortune got me thinking that there must be an alternative to the Terrarium conundrum.  Knowing that she grew up with cats her entire life, I thought I could placate her by visiting cats at the Providence Animal Rescue League (PARL).  Here’s my reasoning:

1.  I was crystal fucking clear that just because we were going to visit them, it didn’t mean we were leaving with one.

2.   It also meant that I wasn’t spending any money on ANYTHING.  By the time we agreed to leave, my plan was to waste enough time looking at cats that it would have been too late to go get a Terrarium.  This was possible because we were going to need to bring Itty Bitty home to sleep within a few hours.  So, I wasn’t getting a Terrarium, and I sure as shit wasn’t going to buy a cat – in the end, I was getting a days worth of entertainment for free.

4.  I’m a dog person and have had them my entire life.  The good news is that there is also a dog adoption program at PARL.  So while Tall Mom wasted her time looking at cats with Itty Bitty, I was going to slip away to the dog part and check out some real canine candidates to bring home with me if I liked one.  I knew I’d be able to convince Tall Mom to get a dog if I really pushed for it.

5.  So either way, I knew I was either not spending anything, or I was getting a dog that I liked.  This, for me, was a win-win situation.

Heather-the-cat not only snake charmed my wife, but also lulled Rhys into some kind of feline trance that prevented him from doing his normal screaming Godzilla rage fits.  She purred and brushed-up her way into my wife’s heart so quickly that I didn’t even have time to think.

Naturally, upon my wife’s request, the staff whisked us off to some meet & greet room that is no bigger than Harry Potter’s broom closet.  I could feel my plan slipping through my fingers as that cat did her dance to entice my wife into bringing her home.  For a second, I thought I saw Heather flip me the bird as my wife carefully caressed her soft and oh-so-ready-to-shed fur.

Then I saw Tall Mom’s face.  I saw Itty Bitty’s face.  They were genuinely happy.  And, while Itty Bitty may have grabbed Heather so hard that I thought her furry skin was going to be ripped from her skull, that cat didn’t bat a fucking eyelash. She just took it in stride.  Not only that, she went back for more Itty Bitty loving. Once I started to put all these factors together, I knew I was a goner.  My family had just over-ruled me.  There was no way I could say no now.  I was bringing a god damn cat home despite all my protestations. 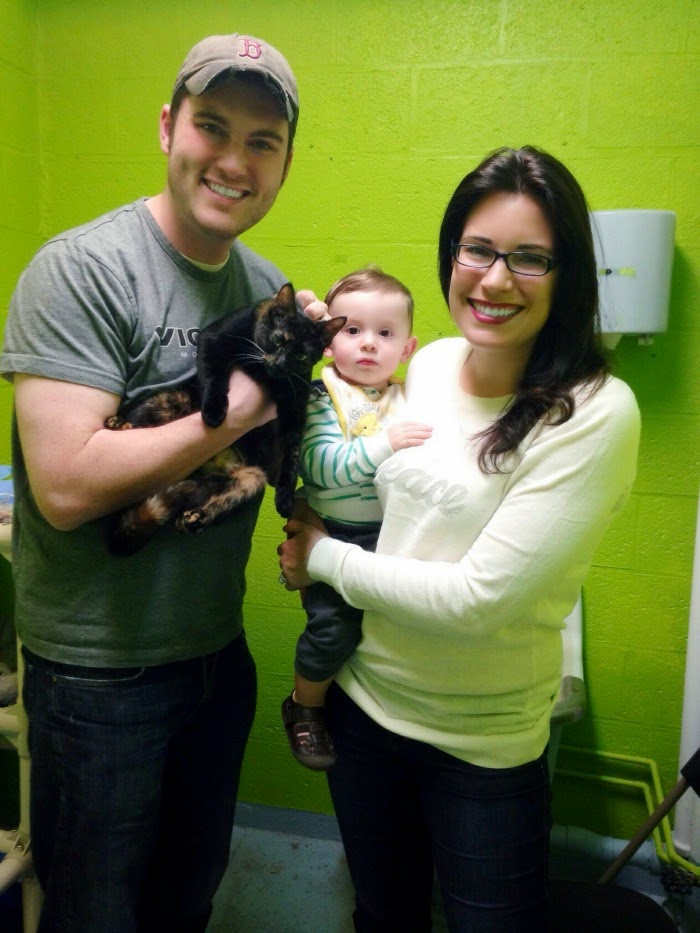 Gone was my pride.

Out came the credit card.

In stepped a cat.

But, my wife loves them.  And, apparently, despite my blood coarsing through his veins, Itty Bitty likes cats too. So, like an asshole, I got one. Maybe that was Tall Mom’s plan all along?  Maybe she baited me into getting a cat.  She’s pretty smart, man.  She’s devious enough to do it.  Holy shit, did I get played?!?  I am literally just figuring this out as I write this.  Wow. 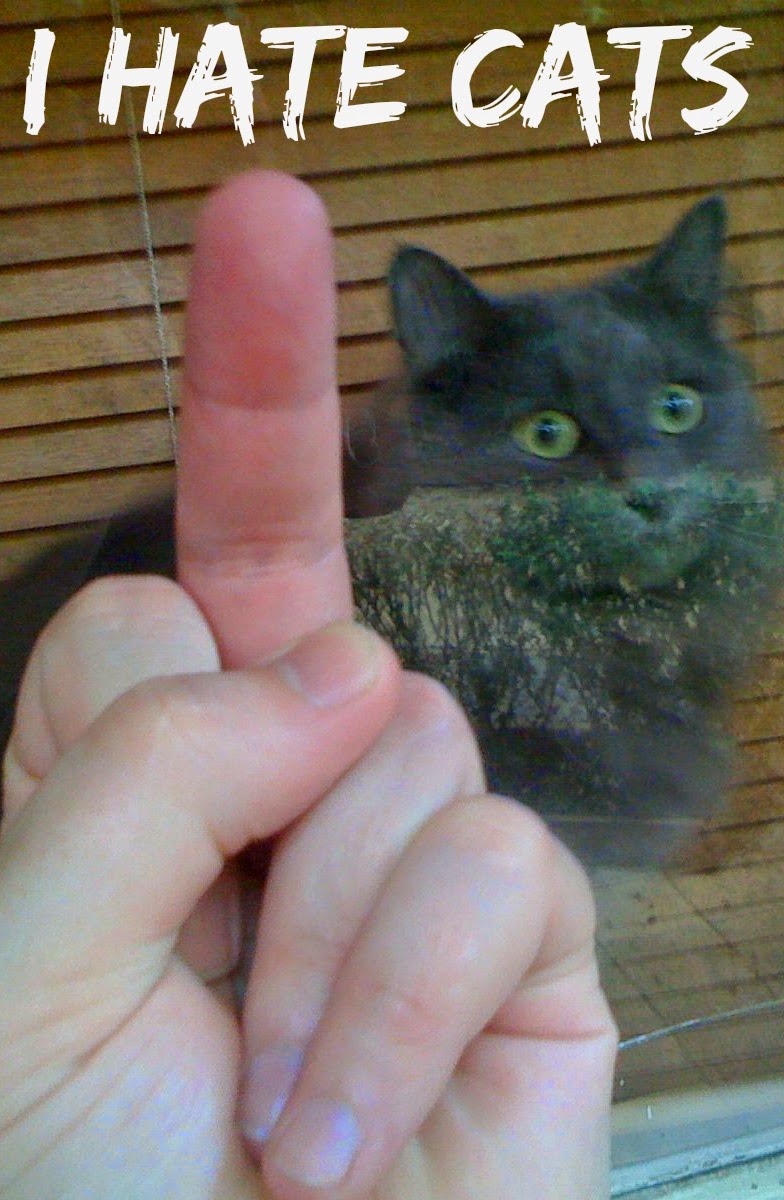 Anyway – I bought that infernal cat and I laid down some ground rules.

CAUSE I FUCKING HATE CATS!

To read Tall Mom’s side of this story – click here.