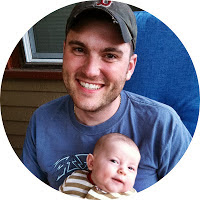 *Disclaimer: This guest post is written by Tall Dad. The following article is not representative of Mary Larsen’s thoughts or values.  She is not liable for the views expressed in the following commentary. Chances are, however, that if you’re reading this, regardless of your tastes, we probably have at least one thing in common – we’re both parents. And you know, just as well as I, that being a parent, either new, or grizzled veteran, is tough on anyone. So, take whatever you like from this article – good, bad, or ugly – and try to enjoy.

You want to know how much sleep I’ve had in the past couple of days? About three hours.  Give or take a minute or two.  Itty Bitty has been teething like a son of gun, and he’s starting to go through this weird rebellious phase where all he wants to do is bust my balls.  Thus, no sleep.

For the most part, I’m a pretty patient dad.  I swear.  Crying isn’t an issue for me, I can see past all the mess, and I’m actually starting to like hanging out with the kid finally.  I’ve normally got it all under control.

Today was a whole different story.  I’ll spare you the details of my hectic day at work as I am still unsure why I even put up with them.  But, when I came home from work, I was already tired, frazzled, and ready to see my wife.

I was, however, on a tight schedule too. I had to feed my son, bathe him, and get him ready for bed all within an hour and a half or so because after 6:30pm – ITTY BITTY SMASH! It was going to be tough, but I knew I could get all my crap done, and finally relax with my wife the way I needed to.

Instead of eating – there was enough running that even Jim Fixx would be proud.  Bathing? Please. Let’s crawl all over every single piece of furniture in the house and proceed to fall off and cry.

Getting ready for bed?  Well, eff that!

We got cats to torture and tufts of their hair to shove in our mouths!

“Time – out” was literally declared at least four times.

And then there was the crying.  Wait, no.  Not crying.  WHINING. You know that fake crying bullcrap your kid pulls that is just so much worse than “real” crying?  That constant drone of high pitched horror? Yeah, that.

The more I tried to get back on schedule, the more whining ensued.  I’d had it up to my eyeballs with the screaming and he really pissed me off. Cue Jackson Brown because I was,  “Runnin’ On Empty.”

Nothing calmed Itty Bitty down.  Until, Tall Mom came to the rescue.

Why she did this, I still have no idea; but Tall Mom put headphones on his tiny skull and blared some random kids music. Think Barney, but, way more annoying.

At any rate – the kid literally stopped crying and being such a whiney little dink.  In the words of a famous wizard with a lightning scar on his forehead, “IT WAS LIKE MAGIC!” 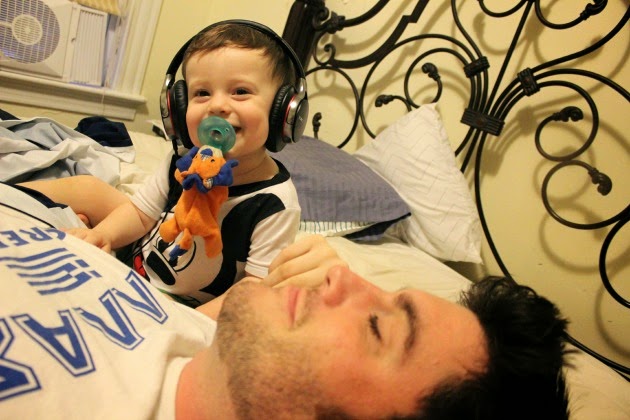 Instead of the crying, now we had the awkward white guy dancing and cute smiles.

Crying? Check. Bed? No check. Yet.

Now I needed to calm him down in a different way because he was excited to hear his music.  If I took it away, there would be more crying.  The horror….

OK, headphones coming off wasn’t an option. Neither, now, was bed. Yet, hanging out wasn’t either – I was sick of him. But I still needed an answer. Then I came up with the best idea ever.

Keep the headphones on and lull him to sleep without doing any of the normal work. 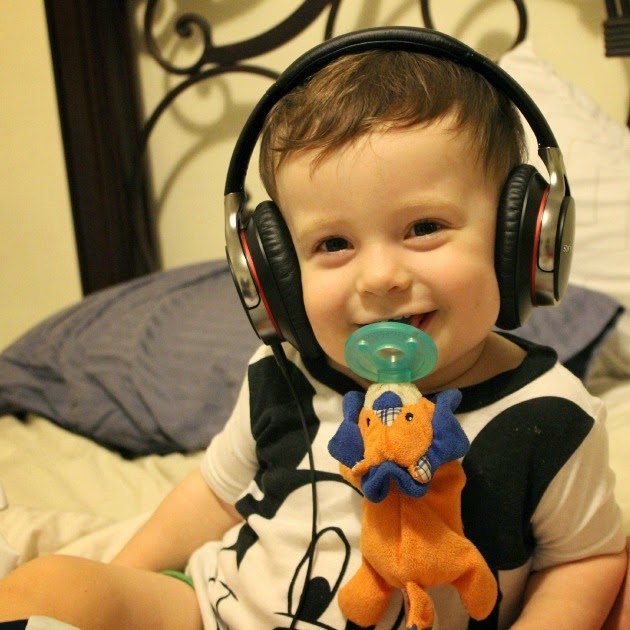 “What music has always calmed me down?” I asked myself.  Nora Jones? Nope, to jazzy right now.  The Lost soundtrack? Nah, too slow, and wouldn’t capture a one and a half year old’s attention.  Loreena McKennitt?  Love her, but too authentic.

Then, it hit me.  Stoners are always chill.  No matter what. Of course, for the most part, what’s the cliche stoner album?  DARK SIDE OF THE MOON!

Pink Floyd always calmed me down as a stoner.  Even to this day, it still blows my world. So, I brought up DSOTM on my phone, plugged those trusty headphones in, and let David Gilmour and Roger Waters run their magic on my son.

I’m not kidding, for forty five minutes, my son laid flat on my bed and relaxed. All I could do was watch as his eyes wandered into space as he jived to the unique sounds and experienced some of the blissful heaven.

Song after song, he requested more, and he got it.  Why not, right?  He was finally quiet. I’d play Liberace if it meant a small measure of peace.

Pink Floyd hit him though.  He just seemed to dig it.  And it was glorious.

Itty Bitty jammed out to, “Time,” “Brain Damage,” “The Great Gig In The Sky,” and countless more. Pretty much the entire album.  I would have even played The Wizard of Oz if I had the time and patience 🙂

I couldn’t believe it, Itty Bitty was seriously entranced. I’d never seen anything like it.

No words.  No white guy dancing. Not even a random movement.  Nothing.

He just sat and soaked it in.  (Which, by the way, is the recommended way to listen to DSOTM)  I finally had a chance to relax, kiss my wife hello, and continued on my with my night.  For good measure, I even threw in some selections from “The Wall.” (Because if you’re gonna go stoner, you gotta go full stoner.) 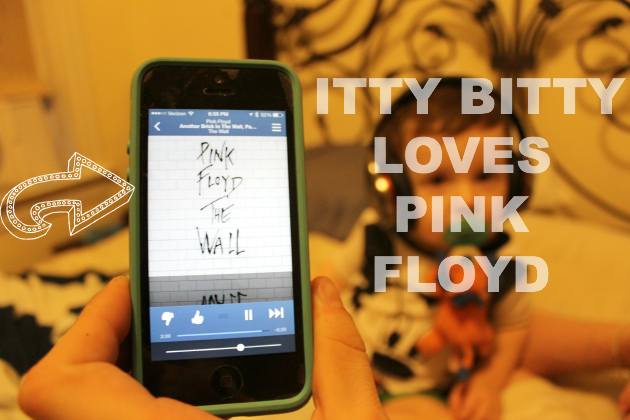 But, Pink Floyd saved my sanity tonight. Know that, and use it as necessary.

Things may be get bad, but it ain’t THAT bad. When you need to distract your kid and chill, throw in some Pink Floyd.  Turn him into a stoner 🙂

It won’t hurt your kid, I swear. Because. truthfully, if DSOTM worked for my kid, guess what?  You’re kid’s gonna turn out just fine.

You just have to thank god for Pink Floyd and their amazing album.  It may have even sparked a new routine in the Tall household.  Bath, dinner, and Pink Floyd.  Every night.

Because, boy, I’d had it and I think I have the perfect antidote.