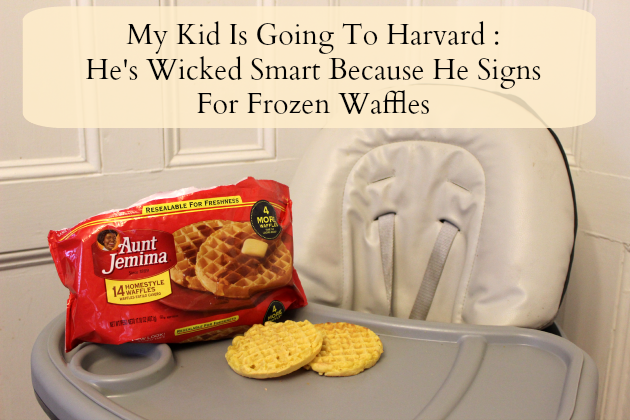 I need to open an extra savings account, start a coin jar, and probably open a college savings fund. All because my kid is most likely going to Harvard. He’s wicked smart. At a mere 18 months, he can tell me if he wants me to read him a different book, prefers frozen waffles over yogurt for breakfast, or if he’d like to take a stroll around the block while wearing his shoes.  Hit the jump to find out how…

My kid is a freakin’ genius.

Or at least it feels that way.

The first year of life with Itty Bitty was rough. I’m sorry – it wasn’t sunshine and rainbows.

He had colic, never slept, drove Tall Dad bonkers, and then I had to deal with a myriad of postpartum problems.

But I held onto hope: hope that one day things would get easier. A hope that we could communicate harmoniously together.

That hope was fulfilled by my favorite baby sign language book.

I began teaching Itty Bitty signs when he was only four months old. Sure, he couldn’t sign back, he couldn’t even sit at that point, but I felt like I was doing something good. Something useful. It gave me something to do during those colicky months.

I signed milk whenever he nursed. Told him the milk was from Mumma, and repeated the word as well as the sign for milk over and over each time he nursed. I would take his hand from time to time and open and shut it while I said the word milk.

I also added in “change” during diaper changes and “book.” Over and over I said and showed the signs, believing in the magic voodoo that was promised to me.  Tall Dad thought I was nuts.  Sometimes, I kind of felt nuts – trying to teach a baby who can’t even hold up his head on his own how to communicate milk.

“Whaaaatt?!” you say while shaking your head in doubt?!

I know, I know. I doubted too. But we realized every time he did the sign for milk, it was the only thing he wanted. No, he wouldn’t sign it when he wasn’t hungry either. He was legitimately communicating with me at only six months old!

The next signs were book and bear. He did these regularly since they were his favorite toys. 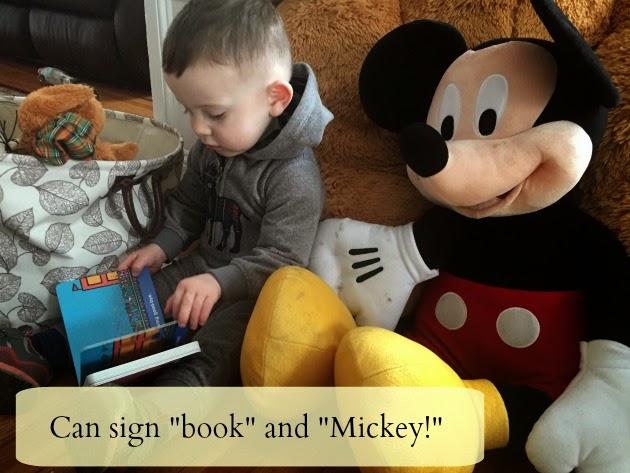 Now that his finger dexterity has gotten better, he has begun learning more and more signs. 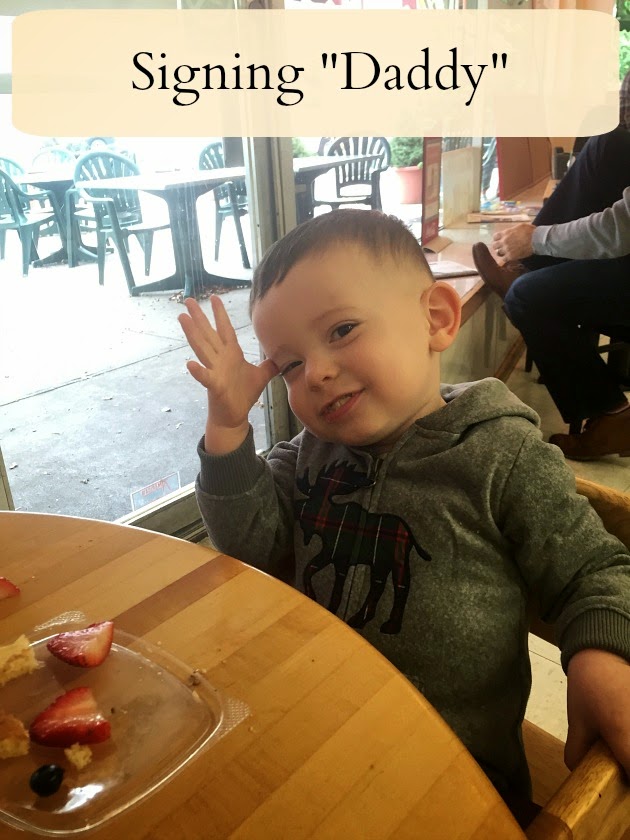 Itty Bitty lets us know if he wants to go up, down, or to sleep. (I swear to God, he asks to go to sleep on his own at least twice a week. This, from the kid who NEVER slept.)

He signs ball, bear, dog, car, truck, please, thank you, more, pajamas, blueberries, walk, light, all done and some I can’t even think of right now.

Most of the time the signs are perfect.  Some of them are hybrids that he has created on his own and we have come to understand him – but sure as heck, my kid can say all that crap.

But the best is when he wants to eat, because then he gets super specific.

He often signs for ice cream or crackers, but every morning it’s the same routine.

He wakes up at 5:30, snuggles in bed with Mumma and Daddy, and around 6am starts signing for a banana, a drink, and a waffle.

I kid you not. This kid asks for a whole bloody menu!

Waffles are Itty Bitty’s morning staple. He loves them plain or with syrup, marmalade, butter, and sometimes even frozen (great for teething.)

Often times he is super hungry and signs for more waffles. He will eat one whole waffle in seconds, and immediately sign for another waffle.  It’s almost as hysterical as it is unbelievable. 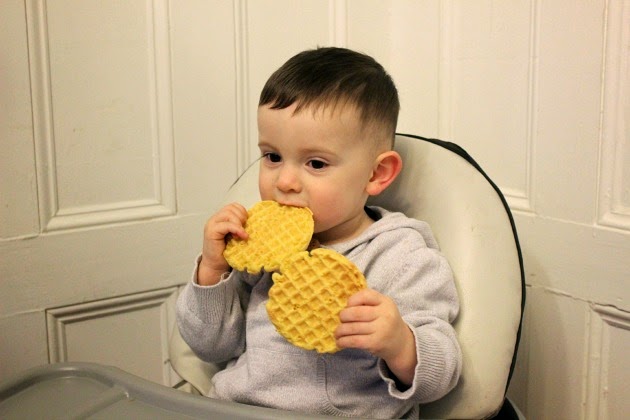 Aunt Jemima frozen waffles are a staple in our freezer, and now I’ve even gotten on the bandwagon. After making Itty Bitty his waffles, I often sneak in one or two of my own. They are perfect for my ride to work – especially with peanut butter slathered in between! Nom nom.

My kid loves waffles so much, that this past weekend when we were shopping at ShopRight, he was mortified when I didn’t give him waffles immediately after purchasing them. As we put him in his car seat he started yelling and signing for waffles. He knew they were in the carriage, and didn’t understand why we weren’t giving them to him immediately to fill up his little belly. 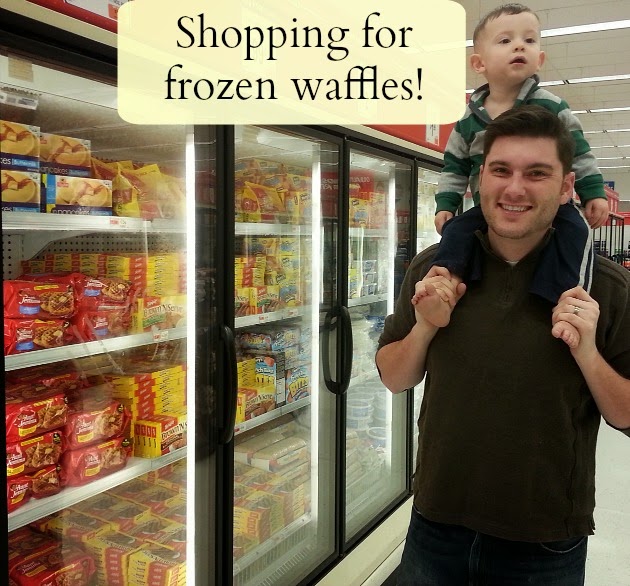 I gave in, and gave it to him frozen. What do you know, the kid gobbled it down right away and was signing thank you.

A FROZEN FREAKIN’ WAFFLE!  Ok, my kid’s not as smart as I thought.  Maybe we’ll have to settle for Yale instead of Harvard 🙂

Communicating with Itty Bitty has been a game changer for our family.  No longer are we scratching our heads wondering what our screaming child wants or needs. We now have full on conversations, and satisfaction knowing that we understand each other to some degree.

And, yes, donations to his college fund are welcome – even if it is Yale 🙂

Note — if you want to be wicked smart like myself – make sure you get this coupon and save yourself a dollar off the waffles! 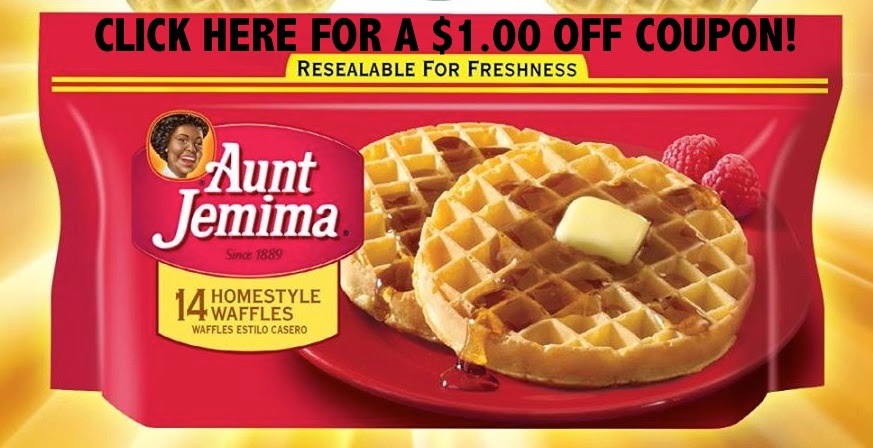 2 Comments on My Kid Is Going To Harvard : He’s Wicked Smart Because He Signs For Frozen Waffles #4MoreWaffles #CollectiveBias #shop