This Star Wars™ The Force Awakens recipe blog post has been compensated by Collective Bias, Inc. and its advertiser. As always, all opinions are mine alone. #AwakenYourTastebuds #CollectiveBias

Let me tell you about the day I realized that I was a fully grown nerd. It was October 19, 2015. No, there is nothing particularly special about that day. It was just like any other fall evening in my beautiful city of Providence, RI – it was a Monday night full of football, getting ready for a Halloween party that was coming up, and I was pounding so much candy corn that I couldn’t tell where my teeth ended and the cavities began.

It just also happened to be the night tickets for Star Wars™ The Force Awakens went on sale.

And this, my friends, is where the journey to full grown nerddom begins…

Listen, I’ve always been a nerd at heart. 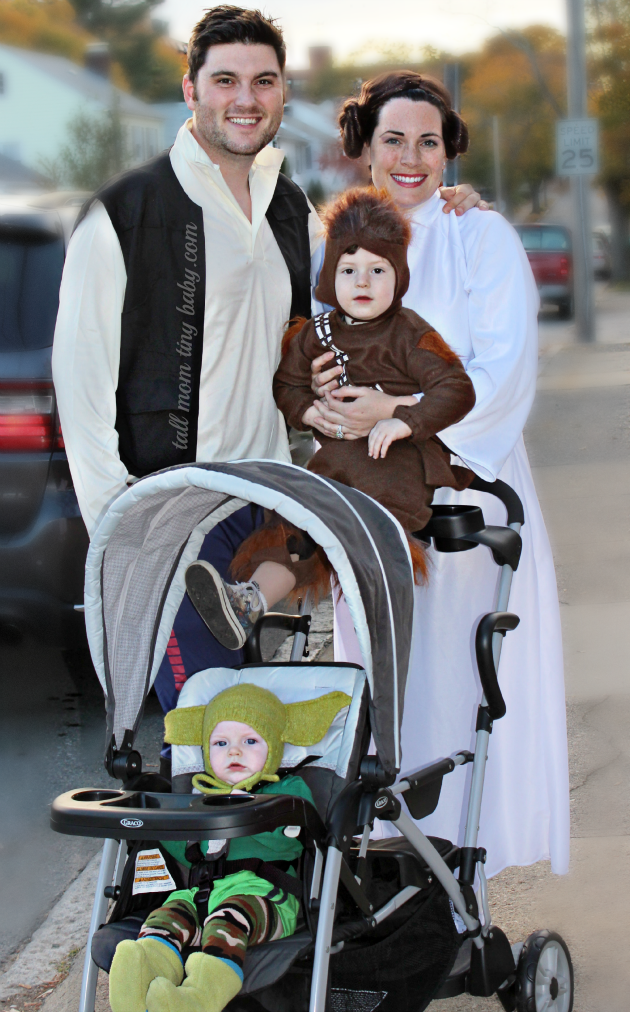 I wanted to be a paleontologist when I was a kid because I fell in love with Sam Neil in Jurassic Park.

I cheered in the theater when Yoda unveiled lightsaber skills in Episode II, and I cried like a baby when Hedwig died in Harry Potter and The Deathly Hallows.

The list can go on and on, but I think you get the point.

But the night when The Force Awakens tickets went on sale is when my complete nerdery was solidified in the annals of nerd history.

You see, my husband and I have been waiting for the new JJ Abrams helmed Star Wars™ since it was announced that Lucasfilm was bought by Disney all the way back in 2012.  Not only is there going to be new films – but it’s more Han Solo, more Princess Leia, more Luke Skywalker and more of the Millennium Falcon.

Why is it such a big deal?

Well, that’s a whole other post I could write. But let me tell you what happened the night the tickets went on sale:

The sale began at 10:15 pm which coincided with halftime of the Monday night football game that was being played and also the release of the latest trailer for The Force Awakens. As a result of this announced time, people like me were totally prepared.

Everyone had their favorite media device out, ready to flood the movie ticket sales sites the SECOND tickets were available.

Not only that, but there were online sources that were showing the latest trailer as well, so people were flocking to those sights too.

But here’s the issue – there are lot of nerds out there just like me.

What the owners of these websites didn’t understand was that there were going to be millions of people waiting to access their content. As such, Star Wars™ fans across the globe quite literally broke the internet. (You’ve got nothing on Star Wars™, Kim Kardashian)

We all came out in droves to by tickets in such a zombie like fashion that we overwhelmed the servers and the sites broke down. You couldn’t see the trailers and you couldn’t buy tickets. Nothing. The Internet came to screeching halt.

What’s worse is that tall dad and I didn’t care that the Internet was broke.

We were determined to not only see the glorious trailer, but also to ensure we were going to get tickets to opening night of The Force Awakens.

We sat in silence, constantly refreshing the pages every minute or so to see when the sites came back online not for just a half hour, or a mere hour. No, we went way beyond the stretches of any normal human waiting capability.

We sat wide eyed in bed until 3am to catch our first glimpse most anticipated movie of the year, and then to buy tickets for the first possible IMAX showing. Let me remind you that we had a our infant daughter sleeping in bed with us and our toddler was going to be up for the day a mere two and a half hours later.

That’s right – we waited over four hours to buy tickets to a movie that was coming out three months from that date. And with that, our journey to the nerd dark side was complete. It was irrevocable.

But we didn’t care. It was Star Wars™. You do what you gotta do for the force.

And let me tell you – we weren’t alone. The record sales for opening day of tickets sales was a million dollars held by The Hunger Games. That’s a lot of money right? Heck yeah. Well, The Force Awakens sold EIGHT MILLION dollars worth of tickets and completely smashed that record. Like said, we nerds are many.

We’ve even planned a complete rewatch of Star Wars™ Episodes I-VI that is timed perfectly to finish the last scene of VI and then start the drive to the theater on the 17th and step right into TFA without missing a beat.

But if you have done a marathon of that size, then you know food and snacks are essential to keep the marathon going. So amidst all the pizza, sandwiches, drinks and everything else that will sustain our deep dive into a galaxy far away – I thought it would be cool to commemorate it with a couple of specially themed treats. These treats were inspired my the Star Wars™ themed General Mills cereal boxes – which have a special droid toy inside!

I actually got a BB-8 in my most recent box of Honey Nut Cheerios at Walmart. To say I geeked out would be an understatement. 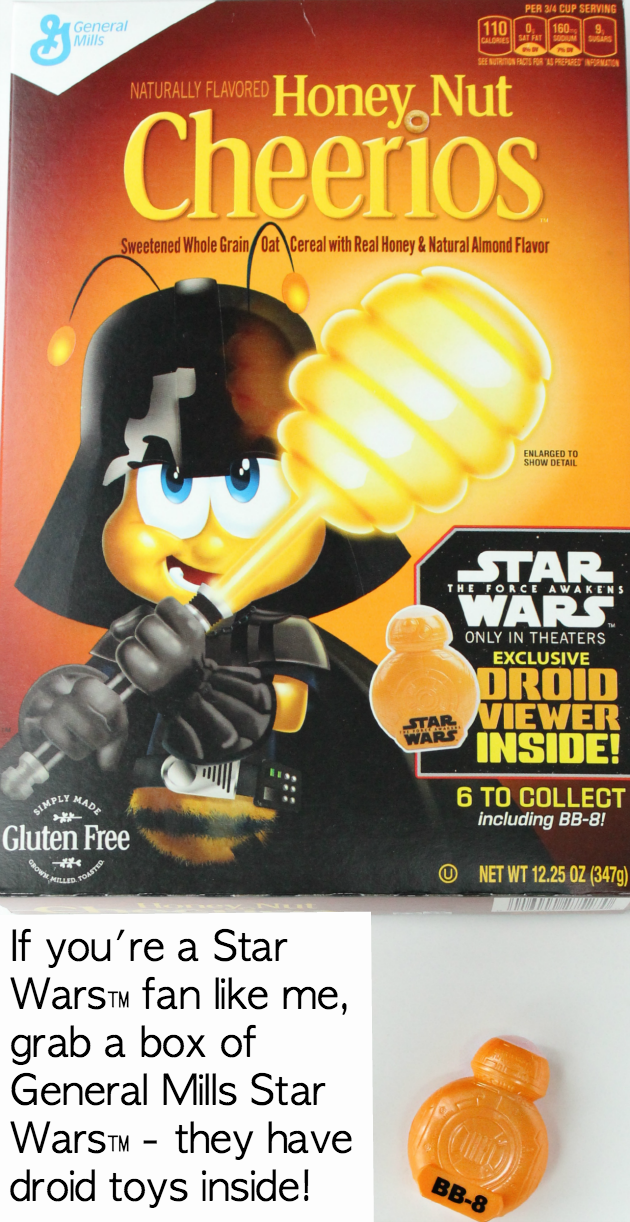 My handy dandy baking skills and my love of Star Wars™ met in the middle to create probably the cutest cookie I’ve ever made, The Yoda Cruncherdoodle Cookie. 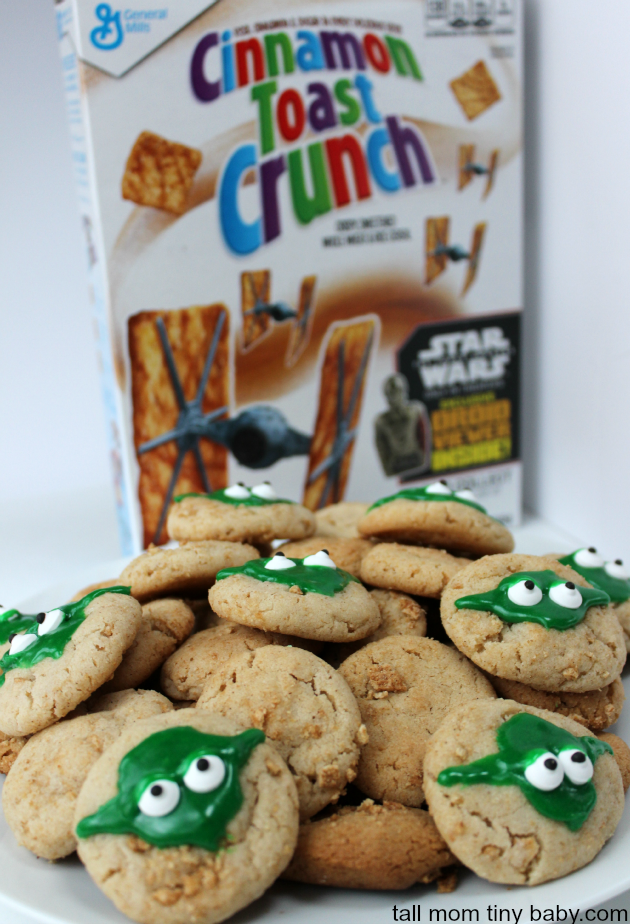 In addition to my Dark Side Trail Mix. 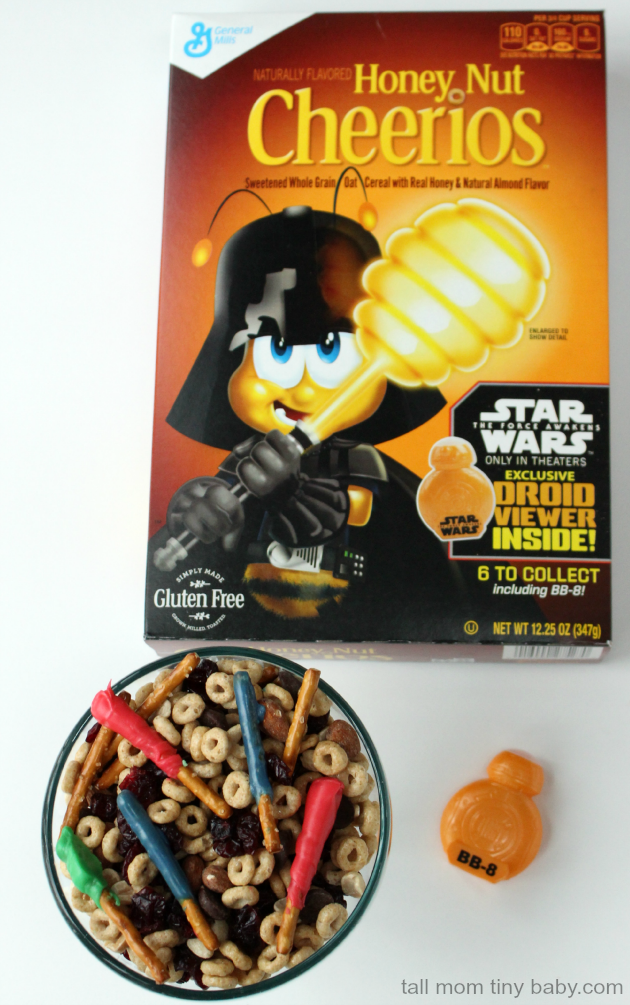 So if you’ve been inspired, and feel like whipping up some super special Star Wars™ The Force Awakens recipes – read on dear friend. These are easy, Tall Mom tested, and delicious!

Instructions:
1. Heat oven to 360°F.
2. Crush Star Wars™ Cinnamon Toast Crunch Cereal®. I did this buy placing it into a large sealable bag, and pounded it for a couple of minutes. After it is finely crushed, set 1/2 aside. 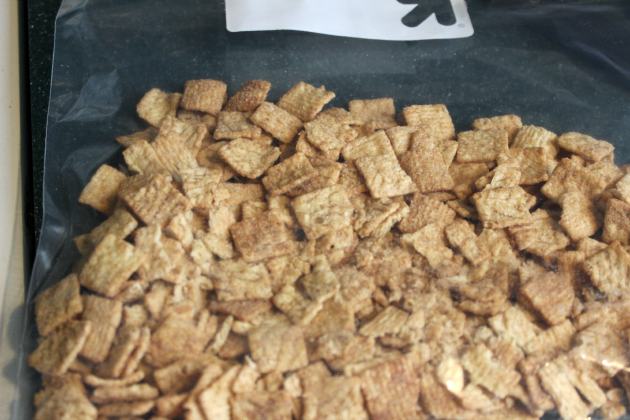 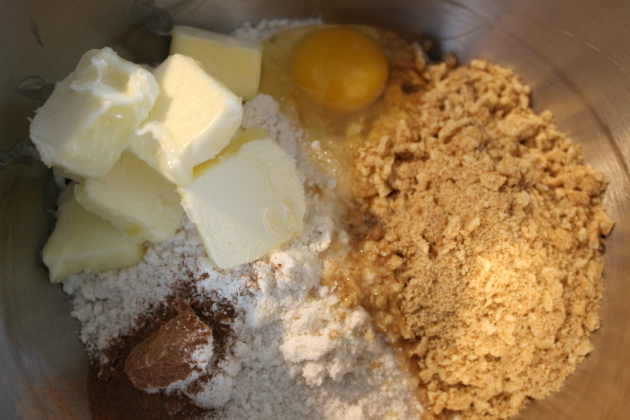 Shape dough into 1 inch balls, and then roll these dough balls in the reserved 1/2 cup finely crushed cereal and the cinnamon. 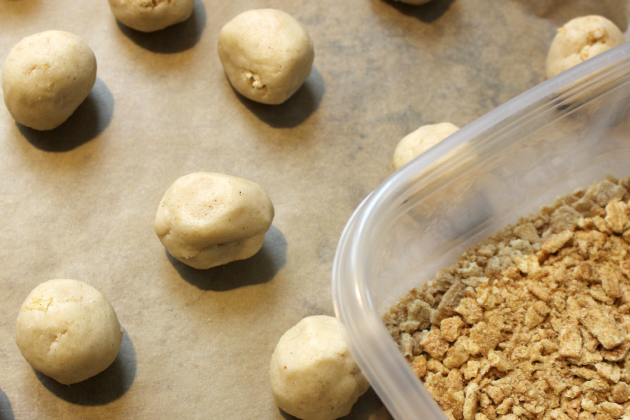 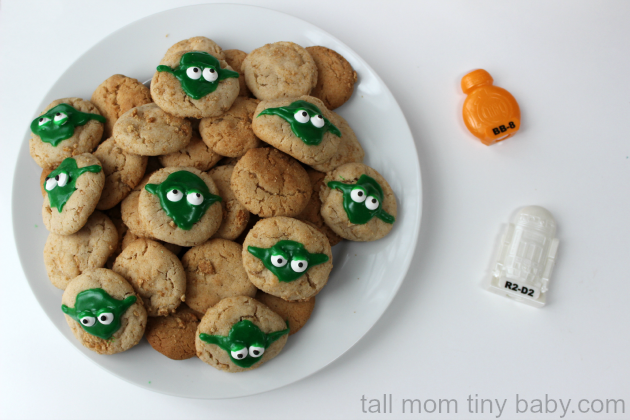 Instructions:
Melt white chocolate in the microwave, or on the stove in a double boiler. Mix mini batches with food color based upon your ideal light saber, and coat mini pretzels. 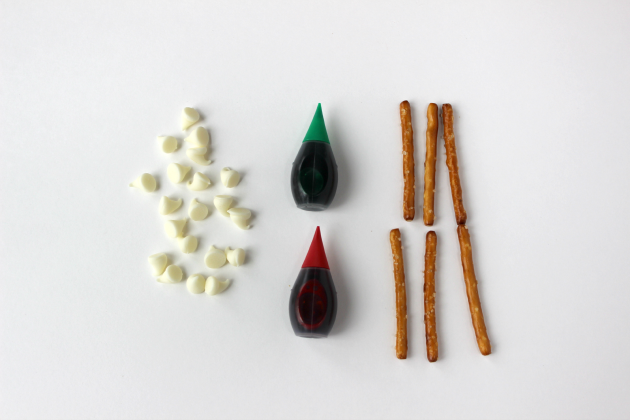 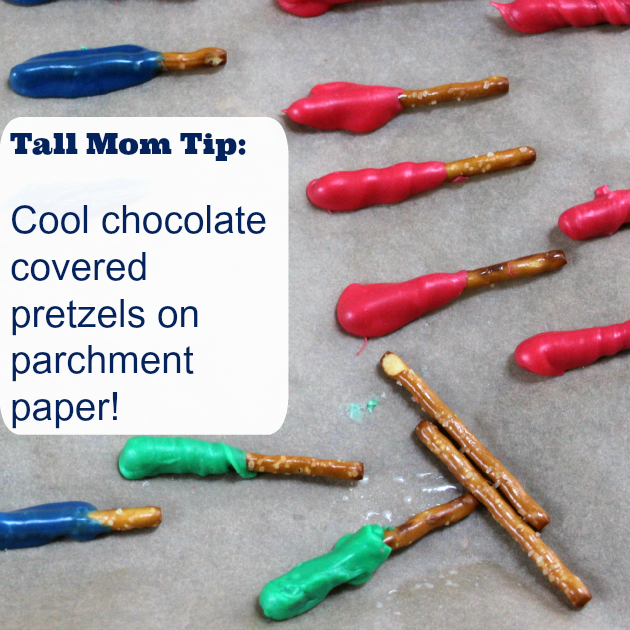 Once cooled, mix all of your ingredients together. 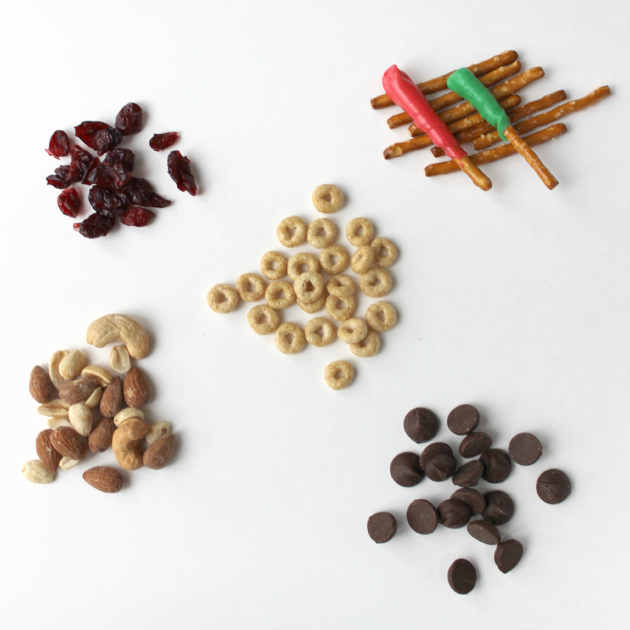 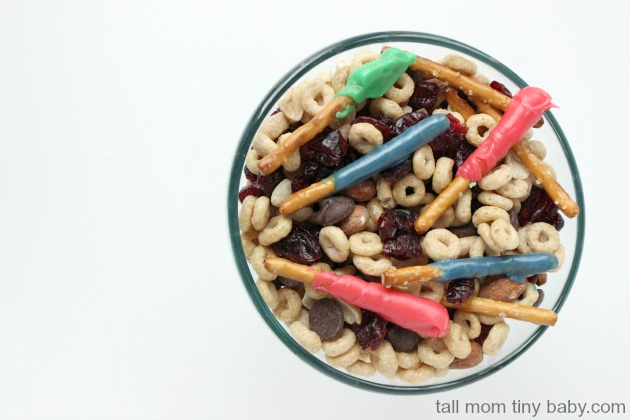 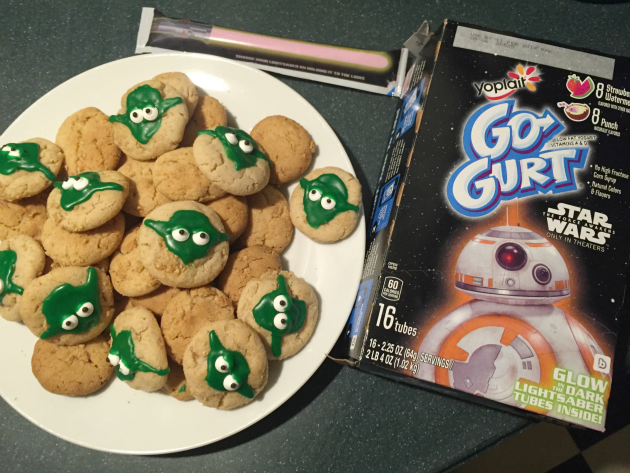 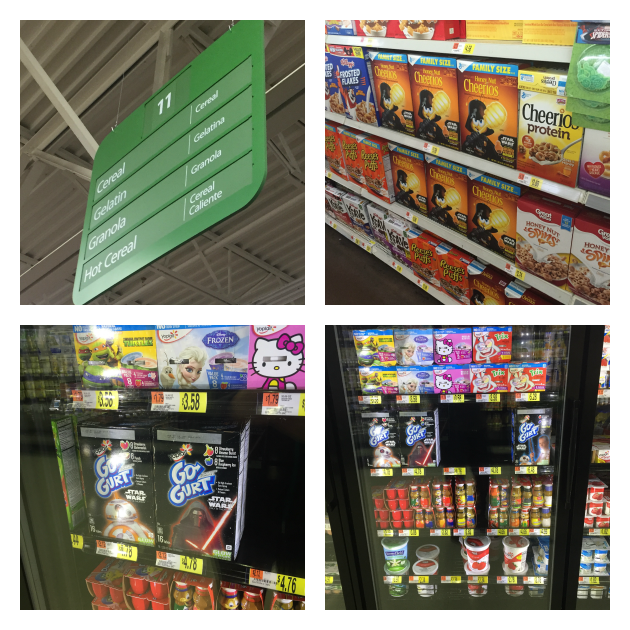 If you or someone in your family is a HUGE Star Wars™ fan like myself, you might want to check out some of these awesome FREE printables – like bookmarks, coloring sheets, door hangers, and a memory game.

Are you excited to see  Star Wars™ The Force Awakens? If so, what snack will you be munching on in the movie theater?

If you enjoyed this post, please feel free to check out these other posts from Tall Mom tiny baby: 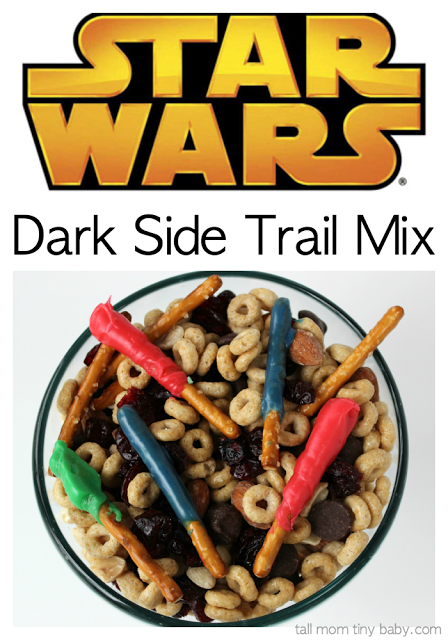 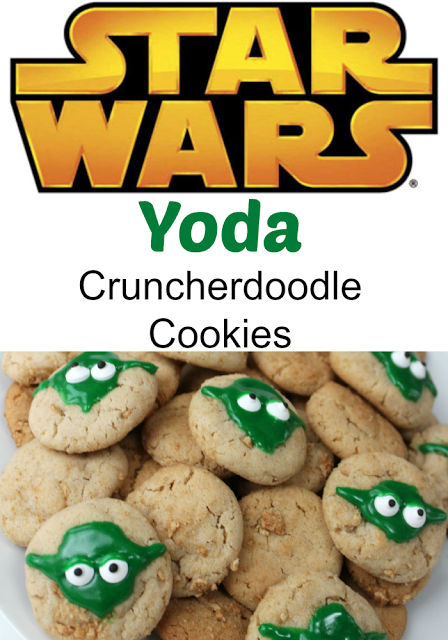