Now bring us some figgy pudding … may be a familiar lyric, but in my household – the dessert everyone wants is plumb pudding! 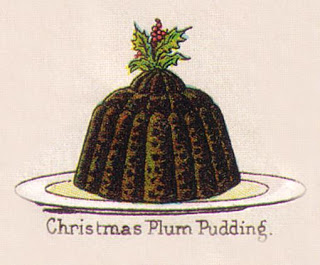 My deceased mother in law made it, so did my husband’s paternal grandmother, and so did the paternal grandmother before that.  The tradition of plumb pudding and hard sauce has been in my new family for hundreds of years.  It is passed down through the first woman married into the family, and being that my husband was the only male born into the family, I have now inherited the holiday dessert.  The Thanksgiving and Christmas plumb pudding will be made in our household until we have a son, and that son chooses a partner.  If I only have daughters, I’m outta luck until the end of my years.

Plumb pudding doesn’t have plums in it, nor is it a pudding.  It is a steamed fruit cake, rich tasting with old spices. The cake takes at least 6 hours to cook, but has taken well over 8 hours since I’ve inherited it.  After mixing flour, molasses, raisins, spices, and the rest of the ingredients, the pudding is then put inside a special pan, which is then placed inside a pot of boiling water.  It needs to be boiled until the entire cake is cooked.

Last year’s Thanksgiving plumb pudding was devastating! After cooking the pudding for more than enough time, we took it out of the mold to find out that the entire bottom was soggy and wet.  There was a tiny crack in the old mold, and water seeped in during all of those hours on the stove.  We mixed up another batch, and tried to bake it in a water bath – in a bread pan of all things.  The pudding tasted the same, but the consistency was different. My husband was so upset, and my in-laws didn’t seem to care for the baked pudding.

This year I ordered two new molds, and am ready to tackle this beast of a recipe.

It takes a great deal of work, and to be honest, I’m not a big fan of the pudding. The tastes aren’t familiar to me, nor is the texture. I make it because I love my husband, and the taste of this dessert reminds him of happy times, his mom, and symbolizes holidays. However, I am secretly crossing my fingers that we are having a son…maybe then I’ll only have to make it 60 more times…480 more hours of plumb pudding cooking!