Today marks the last day in World Breastfeeding Week. The theme this year is about supporting mothers on their journey of breastfeeding their babies. I have decided to tell a little of my breastfeeding story, and how support from others helped me become a more confident mother.

If I was born 100 years ago, I would have been a wet nurse.
A wet nurse is a woman who breastfeeds another person’s child. They were (and sometimes still are) employed when a mother is unable to nurse a baby herself. Sometimes mothers physically weren’t able to produce enough milk on their own, and before baby formula was created, another woman’s milk would sustain and feed the child.

When my tiny baby was born, thank the baby gods, we had great success breastfeeding. He immediately took to it, and thanks to the amazing support I had from my doula and nurses, I felt incredibly confident feeding my child.

Then, a few days later when I came home, my milk came in, and I realized I had a problem.
Many mother’s bodies make the proper amount of milk for their babies. Some have difficulty, and only produce a small amount. My problem was different. My tiny baby only needed a tiny size of milk, but my body got the order messed up, and was serving it up – supersized.

Some people would pump and store excess milk, thinking they hit the milk jackpot! I, however, knew something was off, and decided to not pump – for fear that it would continue to make my body think that I needed the supersized amount of milk.

Because I wasn’t pumping, and was exclusively breastfeeding, being the only person who could feed my Itty Bitty was extraordinarily challenging. I could never leave him, because we didn’t have a milk supply from which he could feed if he became hungry. I felt like I was failing at feeding my tiny baby, and also felt like a prisoner in my own house. I became incredibly cranky, was jealous of mothers who chose to formula feed, and was sick and tired of hearing people say “they wished they had my problem.”

Trust me, no one would want my problem.

I had what is called Hyperlactation.   My breasts, and myself in general were incredibly uncomfortable.  Even worse, so was my Itty Bitty. Instead of having an all you can eat buffet of an endless supply of milk, my child was often gagging and choking on his meal. He would pull off from my breast, crying, and milk would be spraying him on his face. Crazy, right? It was like my body was a  high powered milk Supersoaker 3000. In addition to this wretched routine at feedings (every two or three hours) he was also extremely colicky, gassy, and had green frothy poops.

Hyperlaction sucks (no pun intended.) My breasts always felt full, I leaked a great deal throughout the day, and went through a couple hundred nursing pads. Going out in public was extremely difficult for me, so I often asked friends to meet me at home. I was worried that I would be leaking through my breast pads before I returned home, or that I would try to feed Itty Bitty while I was out and he would start screaming which would cause my milk might to sail straight across the room into someone else’s lap.

So, I did what any other mother dealing with breastfeeding problems would do.

Then I went to see lactation consultant Kathy Moren at Healthy Babies, Happy Moms, in East Greenwich, RI. I followed her advice: 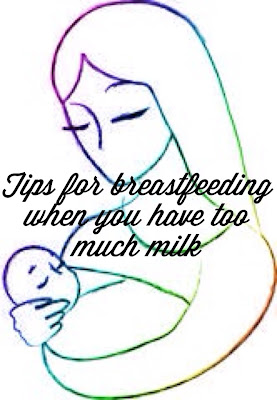 After 10 weeks of having an oversupply, my body and my baby finally found a rhythm. I now actually enjoy feeding my tiny baby, and no longer worry that I am drowning him or causing him gas pain with my milk.

17 Comments on My Battle With Breastfeeding