Sorry that I haven’t written in a while. I’ve been dealing with a severe lack of sleep. Seriously, you should see the amount of concealer that I need to wear under my eyes to make myself halfway presentable. It’s disgusting. I feel like Joan Rivers on a bad surgery day.Ugh. It’s been getting bad lately. I barely go out during the daylight, and if I do, I’m incognito thanks to my sunglasses.But you know what I’ve noticed? I feel like I’ve become a vampire. I’ve been brooding more than Robert Pattinson in every scene of Twilight, I’m as white as a ghost, and I hiss at the sun as it creeps into my bedroom each morning. (But, no, I don’t sparkle like a thousand diamonds shimmering in the glistening sun. Damn you Stephanie Meyer, damn you!) Despite my early protests of not doing it, I’ve stopped responding to friends requesting me to go out and get together. What’s more is that it took every ounce of my determination to get ready for my recent appearance on The Rhode Show.

Because my family no longer sleeps. Nope. Sleep, to us, is like a mythical creature. It’s like the Lochness Monster or Bigfoot. There seems to be record of it’s existence, but it’s validity is shoddy at best, and no one’s seen it since. “Did I just see what I thought I saw?…….nahhhh. couldn’t be.” God, is it tiring. Honestly though, It’s as if our cute little apartment has turned into an all day/all night rave. But, this party has only one guy. You know that guy – that guy who’s just way to into it. He’s waving the glowsticks and breaking down moves that would put even Usher to shame. Yup, that guy. And that guy is none other than my Itty Bitty. 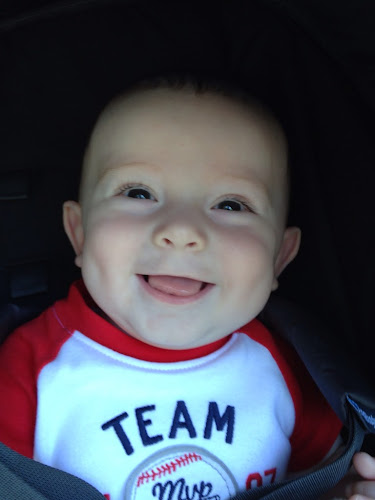 See, he didn’t quite get the memo that glowsticks and all-nighters were really only suitable for Jersey Shore juice-monkeys and newborn babies. Most chaps his age (5 months) are welcoming the sandman with open arms.

But my kid? Ha. He just laughs and gives the sandman the double bird.

My colicky, yet, oh so loving and sweet babe thinks sleep is for the weak. Our typical night looks like this:

8:30 – 10pm – It’s party time in Club Larsen (until he’s all partied out and decides it’s cool to finally sleep with the big kids…aka his parents.)

2:30am. Every clubby needs the late night snack at the sausage stand, right? So, he’s back up again to feed. (This, I can handle.)The rest of the night, however, becomes a blur:

3:30am – wakeup, fuss, wants to hang out for about an hour or so, whimpers and cries until he is held by me

5:30 am – wakeup, doesn’t want anything to do with me, and insists on being held by Tall Dad

7:30 am – wakeup, gets his diaper changed, and sometimes wants to eat and go back to sleep

So Tall Dad & I are going to be trying a couple of new tactics. Wish us luck. You’ll know that they are working if you see me outdoors before 6pm, not wearing sunglasses.

Did your baby have difficulty sleeping? What tricks and tips helped you? (Seriously…we need help)

10 Comments on I'm As Sullen As Edward Cullen