Nursing has had it’s challenges and so many rewards.  Because Itty Bitty showed up a few weeks ahead of schedule, I was never able to actually take a breastfeeding class. Luckily, the hungry little bugger army crawled/squirmed across my chest the minute after he was born, and found my right breast.  Kid should be a navigator one day, he was dead on!
The days after birth were a blur of activity. Between learning the sounds of a newborn, being poked and prodded like a cow, a severe lack of sleep, and being was shown about 1.2568657 million different ways to hold and nurse my new baby, my head was left spinning.  But, strangely enough, I actually went home feeling like a breastfeeding pro.
Then I found out I had overactive letdown, and a big enough over supply to fill Narragansett Bay. Some may think this is a blessing – but let me tell you – it’s not.  In fact, it was really difficult for me.  Thanks to the wonderful support from the RI New Moms Connection & Healthy Babies Happy Moms, I made it through, and now have a great schedule and supply for my seven month old little man.
I now LOVE breastfeeding, and, (much to the chagrin of Tall Dad’s fair sensibilities) do it whenever and where-ever Itty Bitty and I are, as long as he is hungry.  He has even gotten used to signing “milk” with his fists (scholarship!), and I am more than happy to reward his communication skills.
I’ve nursed in parks, parking lots, restaurants, while reading a book in a store, wedding venues, friend’s houses, beaches, and just about anywhere else Itty Bitty and I go.  You name me a place, and I’ll bet the mortgage I’ve nursed there.
I’m extremely comfortable feeding him, with or without extra coverage, but when I do use a cover (feeling a little like The World’s Most Interesting Woman) – I now choose to use the Nuroo Nursing Scarf.  (Same company as the Nuroo Pocket – one of my must haves for new moms!)
I’ve tried a few different types of nursing covers, and found the fabric to be uncomfortably stiff on nearly all of them.  What’s worse is that ALL other covers became a wrinkled up mess in my diaper bag!  I’d rather have no cover at all than whipping out my un-ironed crumpled mess, which just looked like a crinkled pillowcase.
Instead, I get to wear my Nuroo Nursing Scarf, which is a scarf AND a nursing cover.  I wear it around my neck as an infinity scarf, and then readjust the buttons to create a nursing cover when I breastfeed Itty Bitty. 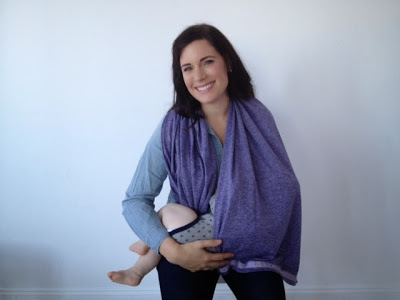 The material is so soft and breathable, and doesn’t wrinkle up! Plus, I can wear the scarf and cover in multiple ways.  The fantastic founders of Nuroo, who just so happen to be Rhode Island based, have created a helpful video to show you the different styles you can do with your nursing scarf.

I honestly love this scarf for so many reasons.  It is extremely fashionable, light and comfortable, and is VERSATILE. 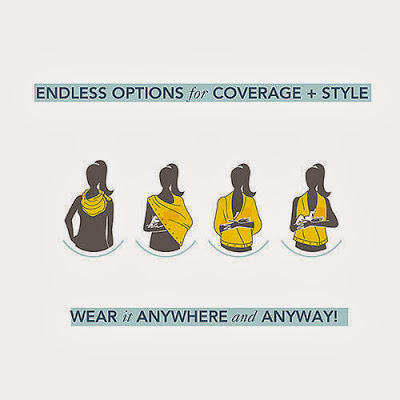 But the best part about this scarf is that my wiggly, nosey, investigative, FOMO (fear-of-missing-out) Itty Bitty has finally met his arch nemesis in the Nuroo scarf.  He normally rips off covers with ease – showcasing my boob to the world (again, offending Tall Dad’s fair sensibilities) – at which point he usually removes his mouth and smiles to anyone who has seen his magic trick.
But, in the ultimate move of skullduggery to thwart Itty Bitty’s constant efforts of embarrassing his dad, the Nuroo Nursing Scarf was designed with SNAPS! These snaps allow me to be covered and stay covered.  Sure, my little Hoodini of a child can try to wiggle out, but he has a much harder time uncovering my goods to the rest of the world.
It’s comforting to know while wearing the Nursing Scarf,  I am assuredly covered, and that my tiny baby is less likely to be distracted by the buzzing world that surrounds him as he feeds. Instead, my little David Copperfield has his eye on the prize and doesn’t wrestle with fabric.   Not to mention the fact that he is also covered in a lightweight fabric so he doesn’t overheat, while I am covered in a beautiful cover without wrinkles.   What more could a nursing mom want?!? Well, maybe if it were washer and dryer safe… Oh wait,  it is. Yeap. Nuroo nailed it here ladies.
Solid colors of the scarf are available at Baby’s R Us, and adorable striped prints will be available at smaller independent retailers – for example – mod moma (in Cranston, RI) will have them later this winter! 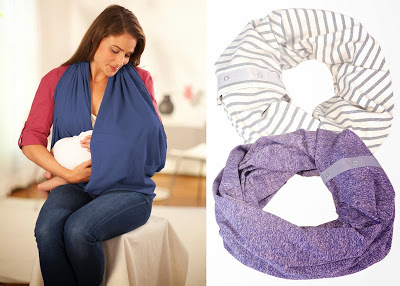 And one lucky Tall Mom tiny baby reader is going to win their very own Nuroo Nursing Scarf! Just enter the giveaway below – and a random winner will be chosen December 3rd! Good luck 🙂

***Note: I was given a Nuroo Nursing Scarf to review on my blog.  All opinions are my own. In fact, I can tell you that I absolutely positively love this scarf, and have actually purchased another one because I want to have a varitety of colors.