I participated in a Influencer Activation on behalf of Influence Central for First Response. I received product samples as well as a promotional item to thank me for my participation.

I have an unusual female cycle, and can go months without a visit from Aunt Flo. Because of this, I am constantly visiting the ladies room to take a pregnancy test. Even when Tall Dad and I weren’t trying to get pregnant, I would be checking once, sometimes twice, each month. I should have bought stock in companies like First Response!!

But I’ll never forget the day I first found two pink lines on my pregnancy test.

I had wanted to get pregnant, but was nervous that my irregular female schedule would make things difficult. After visiting my OBGyn and taking a pregnancy test in her office, (negative, just like every one I had taken at home) she recommended that I start utilizing home ovulation tests.

Now for those of you who have never used an ovulation text, they are very much like pregnancy tests – in that the stick is placed in urine, and it helps determine hormone levels.
Well I used those ovulation tests for a month straight, and as the days passed, I grew sadder and sadder.
I wasn’t ovulating. Neither on the 15th day of my cycle, nor the 20th, and I still hadn’t ovulated by the thirtieth day.
The last week of taking ovulation tests was tough on me. I remember crying a little bit each day.
Then, after taking the test for the thirty days, I suddenly thought that I should probably take a pregnancy test. I don’t know why, but I just felt the need to head out to the store to pick up a new test.
Tall Dad was still asleep, as it was a Saturday morning. I came home, unwrapped the foil wrapper, took a deep breath, and took the test.
There were two pink lines. Two.

Two lines I had never seen before.

After all that hoopla, it’s hard to imagine that we just had our SECOND tiny baby a mere two weeks ago.  Suffice it to say, TTC (trying to conceive) isn’t even a blip on our radar right now, but I have several friends who are having some serious baby fever.

I would recommend to them, and to you dear reader if you are TTC, to check out the new First Response Early Result Pregnancy Test. It has a cutting edge curved shape – which is much more user friendly! There is a 50% wider tip, and it has a longer handle. 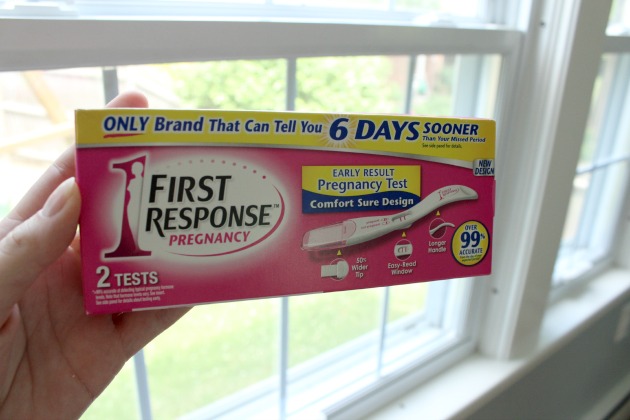 The First Response pregnancy test can detect pregnancy as early as 6 (six) days before the day of your missed period. Results are easily read within 3 minutes and the test can be used at any time of the day. You can pick up the tests for yourself at all major drugstores, mass and grocery stores – for $8.99 – $15.99.
So here’s a fun question for you – have you ever asked YOUR MOM what it was like when she found out she was pregnant with you?

If so, how did she know? I’d love to hear how different their experiences were!
Talk soon friends,