When you have two young kids, going out is really tough, man. (Wait, who am I kidding – going out ANY amount of kids is tough.)  There’s a lot of planning involved, a lot of tension, worrying about who will take care of what, and what the kid(s) will be doing as well as getting into. In the end, it’s really tiring.  To be honest, going to the park is enough for me.  I don’t need a huge day out with all different kinds of activities and worrying about  a schedule like I how I used to be.  I suppose, all I want is to just go somewhere and have an experience – to let the event or the place I’m at just wash over me and guide ME where I should go.  Tall Dad and I recently took our family out and I got this exact experience – and it was to King Richard’s Faire.  And my god, was it awesome.  Let me explain… 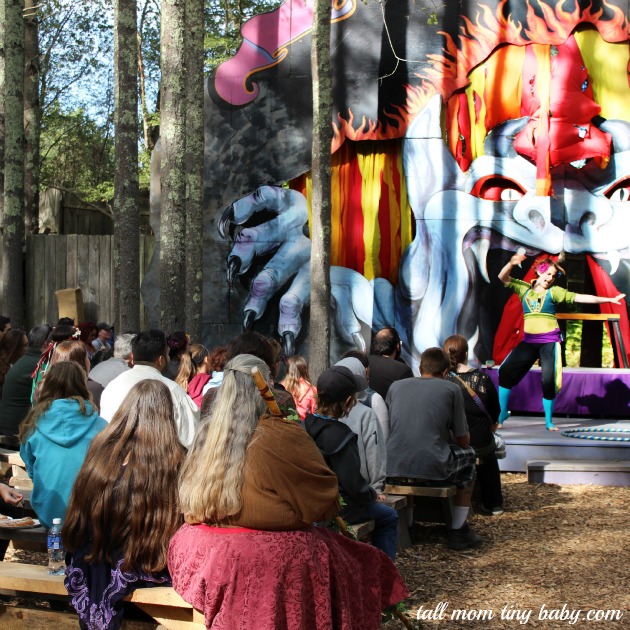 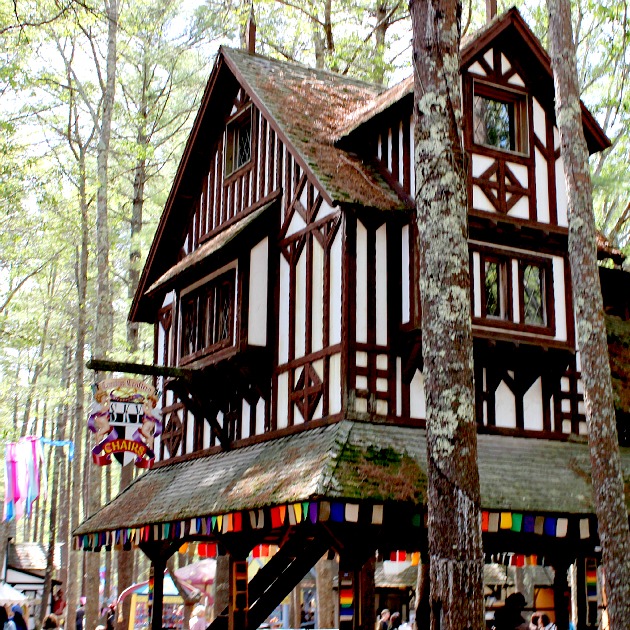 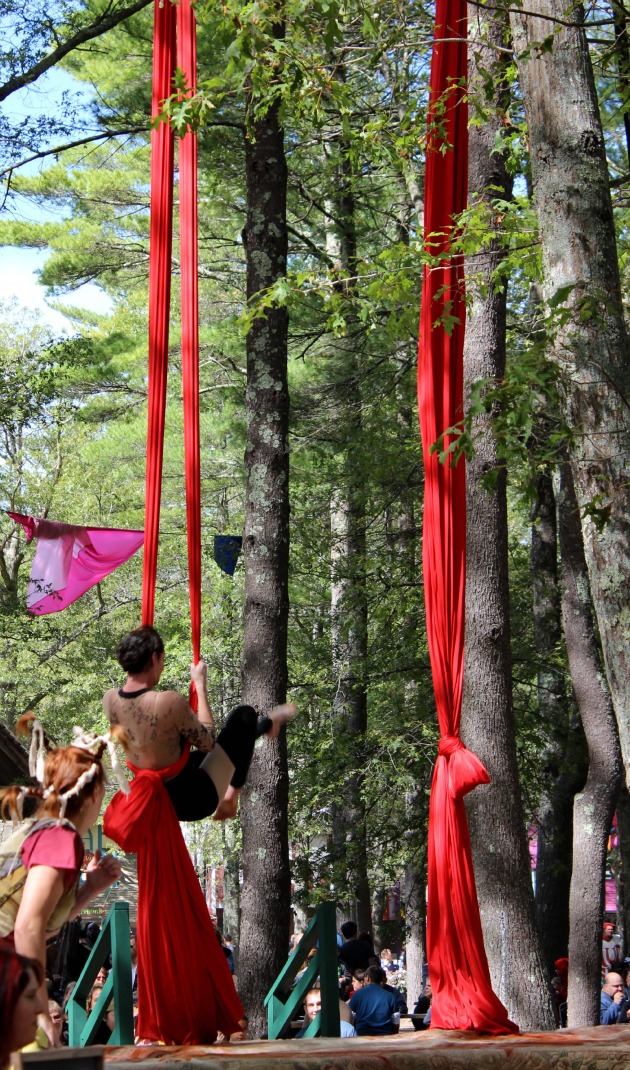 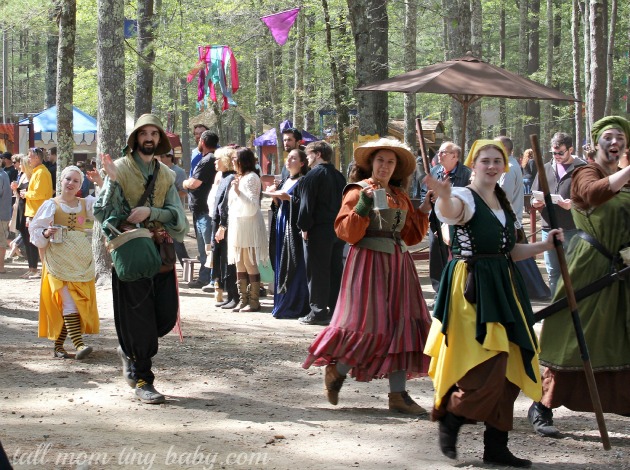 Tall Dad and I are into historical stuff like this to begin with.  We love medieval culture, and, more importantly, stuff like Game Of Thrones.  Which, in the end was really cool because it just happened to be Game Of Thrones week at King Richard’s Faire when we were there (more on this later)

We had been to King Richard’s Faire before (in our younger days when we took the motorcycle instead of an SUV packed full of us, our two kids, and all their stuff) and we LOVED it.

There’s something so romantic and adventurous about being swept off your feet by the moment, and truly believing you have really been transported back to a medieval village/faire. 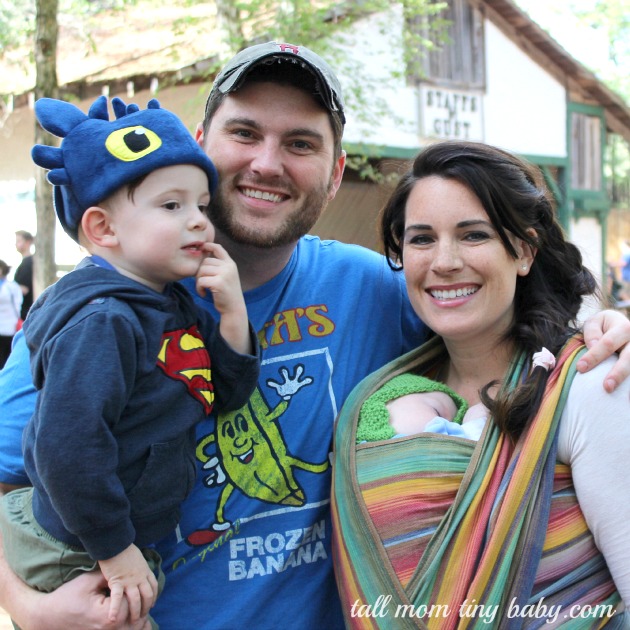 You see, King Richard’s Faire is essentially a theme park.  It’s our own little version of medieval Disney World, and it’s very enveloping.  Characters from the village (ranging from peasants, peddlers, musicians, knights and even the King himself) walk around interacting with the visitors.  It’s great because if you run into a situation where the king wants food and you’re waiting in line to get the food, he will literally walk up and get the food in front of you because, well, he’s the king.  But, it’s all in good fun so I don’t mind.

These people (god bless ’em) stay in character the entire time.  When you meet a knight, you’re meeting a KNIGHT.  When the bar wenches are performing their songs and tricks on one of the stages, it can get pretty fun and authentic.

This authentic feeling is perpetuated by the people who attend the baby park too! People literally dress up like they are staff because that’s part of the magic of the park.  You can go in costume and it’s accepted.  In fact, if you’re not in costume, you almost feel out of place.  Some of the costumes are so good that it’s even hard to tell the people who work there from the people who are patrons! 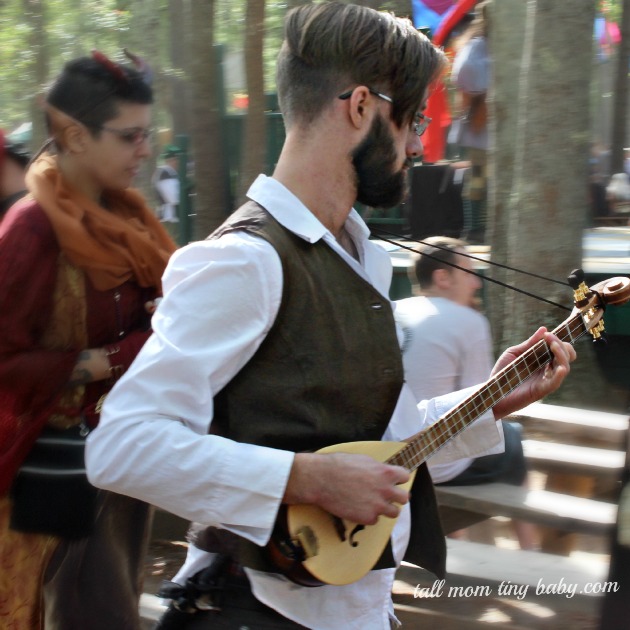 Which brings me back to the point for the Game Of Thrones week.  King Richard’s Faire did this really cool thing where they have a contest open to ANYONE who can sport the best Game Of Thrones costume and likeness.  So all these people were walking around looking like Kal Drogo, Jon Snow and I swear on everything holy that I literally saw Emilia Clarke (or someone who is drop dead doppleganger for her and Daenerys Targaryen) just walking around drinking some well earned meade. In my humble opinion, it’s genius contest that makes you feel like you’re engaging with the park and the people. 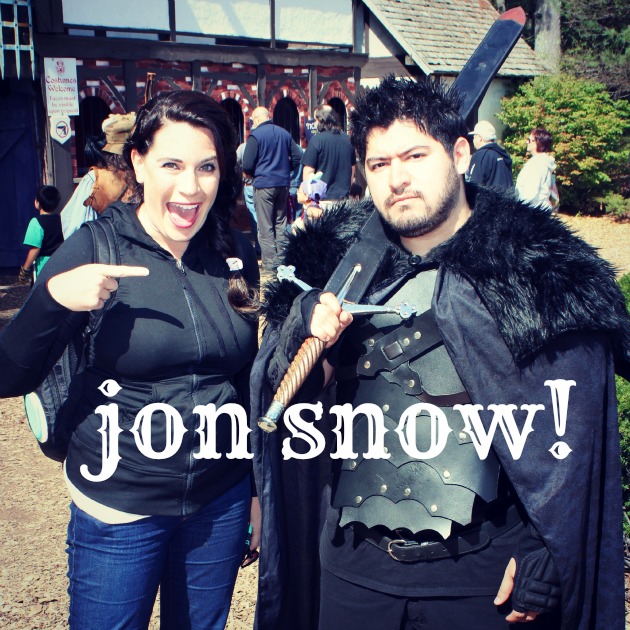 Of course, there are the games you can play, rides you can go on, and go to all the little shoppes that sell all different kinds of costumes, weapons, jewelry and even kilts! 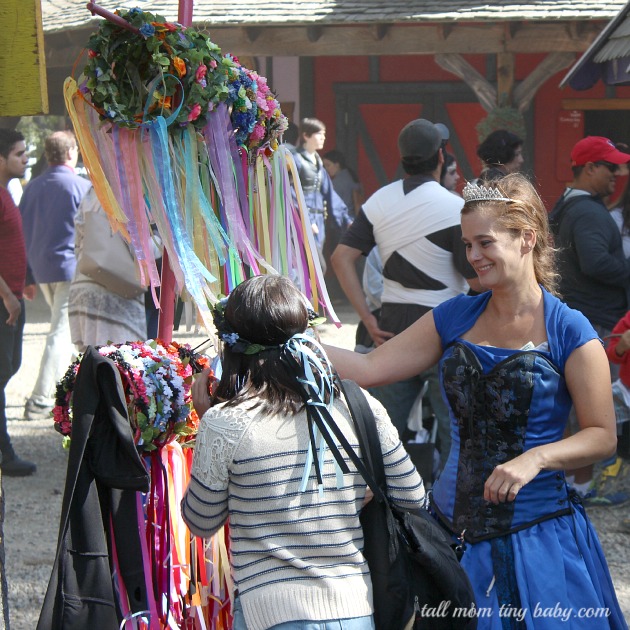 Tall Dad and I have a podcast dedicated to the show Outlander on STARZ called Outlander Cast, so when we saw the Kilt place, we knew we had to honor our favorite scotsmen and buy a kilt that had our family colors!  And, boy, was Tall Dad cute in his new threads 🙂

But here’s the real kicker – we did all of this with our kids.

And it was easy.

We walked around with our double stroller with total comfort.  People we courteous, and understanding because everyone was having so much fun.  All we had to do was just show our son Rhys around and he was mesmerized by all the things going on around him! He wanted to go on rides, watch people sail across the air on their sashes, or live through the experience of watching his favorite colored knight on the jousting field.  He laughed, he clapped, and he was genuinely excited when our knight won the competition. 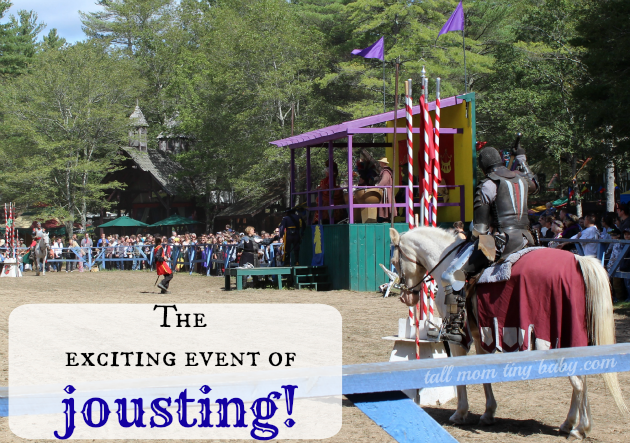 And as the knights battled, we walked through the rest of the park and were accompanied by the sweet sounds of the live fiddle, and bagpipes floating through the breeze.  Also in that breeze was the irresistible smell of the ever famous turkey legs, and cinnamon buns from the on sight bakery. 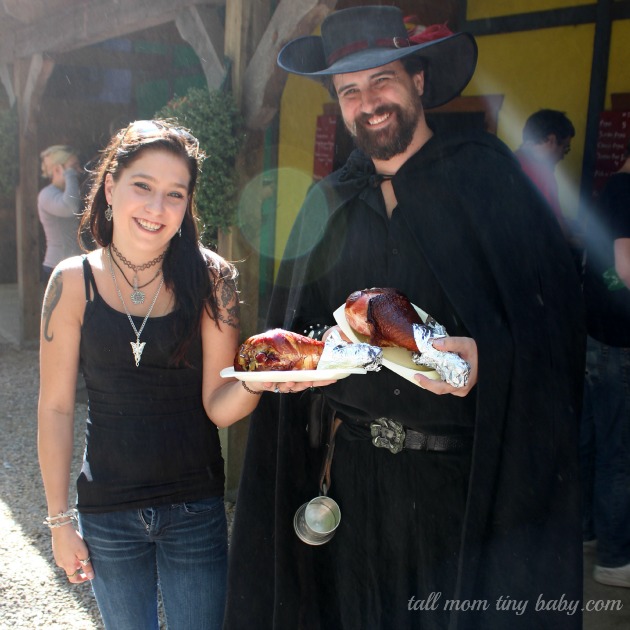 Why do I say all of this?


It was an experience. 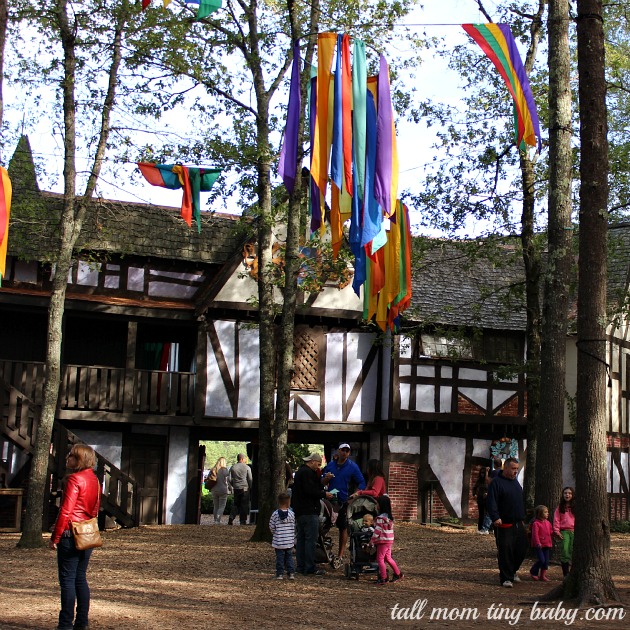 We just went, and let all of the entertainment wash over all of us.  We watched guys perform acts with whips, and people sing very unique pub songs, and all different kinds of acrobatics.  Rhys loved it all.

Do you have to buy a ticket to get in? Of course! Do you have to pay for food? Obviously. Playing games also has a small cost to it as well.  But, the idea that we love is that your ticket buys you a stop in a medieval village that will provide you ENDLESS entertainment all day just from the people watching, smells, and acts alone.  Walking around all the shoppes, and seeing all the different (and sometimes very elaborate expensive) costumes is worth the price to get in alone. 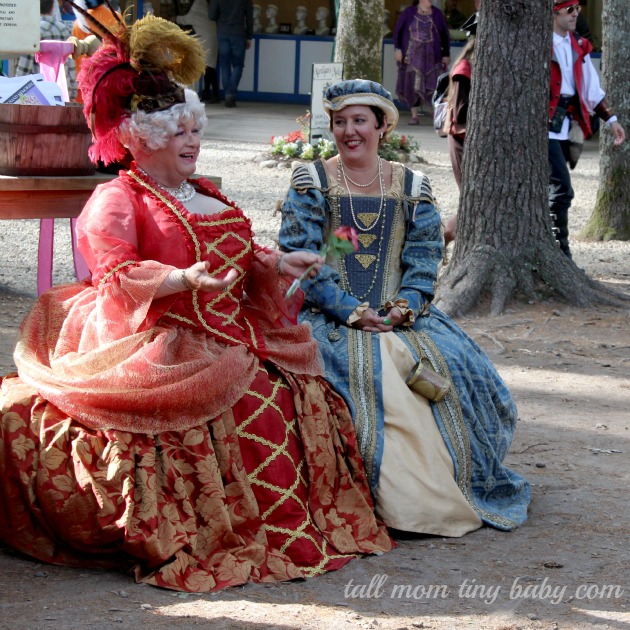 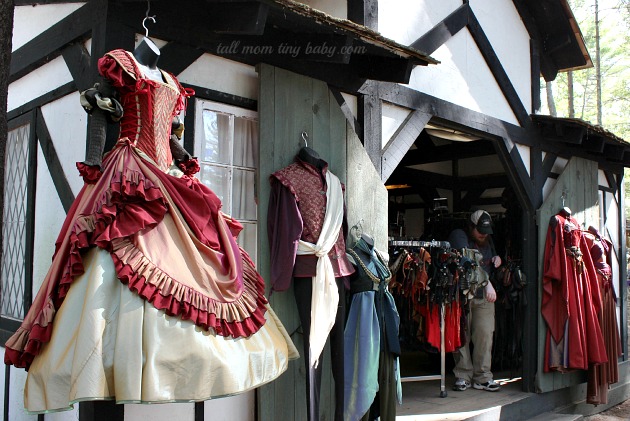 My kid was entertained for hours (and you know how hard that can be) and Tall Dad and I had a blast just watching him run around and even go on a pony ride because he loves horses so much. 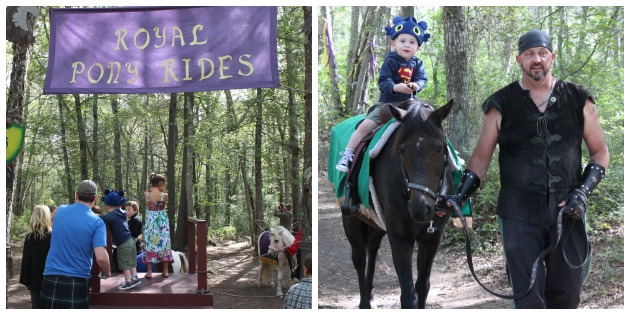 I love King Richard’s Faire.  Not just because it’s own little version of Disney World here in southern MA, but because my kids adored it. 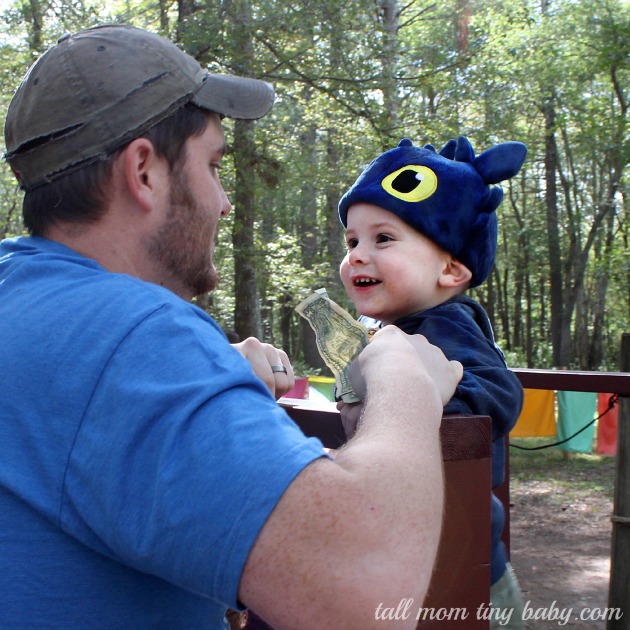 4 Comments on Our Trip to King Richard’s Faire