If you’ve been keeping up with my blog, you may have gathered that I’m a pretty big fan of The Walking Dead on AMC.  I probably reference that show more than I really should.  Sadly, when one watches this much zombie television, one is also likely to have creepy dreams associated with flesh eating back form the dead humans. 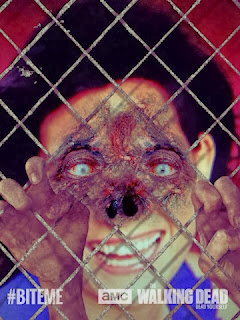 Yuck.
Well, in one of my dreams, I got bit. It was by this young twenty-something male zombie, wearing a tattered grey and blue plaid shirt. In my dream, I was closing a gate, and he came at me from the side without any warning, and bit my right arm.

It was terrible… those teeth…ripping through my skin. I tried to cry out, but I couldn’t.  Oddly enough, when I woke up, the first thing I thought of was my child.

Itty Bitty’s first tooth is coming in, and it too has been a terrible experience. This past week has been full of sleepless nights, whining, crying, and a downright cranky infant.
And when I think about those brand new razor sharp teeth, cutting through his young sensitive skin, I can see why he’s been so damn miserable.  It’s probably like taking an Exacto knife to your gums!  These baby teeth must really hurt!

At least zombie teeth are old, worn down and a little more dull from eating brains all day!  Although, when I think about it, baby teething, and Walkers have a lot more in common than you could imagine.  Take a look at these sings that your baby might be teething:

If you watch The Walking Dead, or have seen any zombie movie of late, you know that zombies suffer from the same symptoms!  Yeah, I just called Itty Bitty a zombie.  I’m a great mom.

Well, even though Itty Bitty may be a zombie and desires the taste of flesh more than I could have ever expected, we still should have seen these tell tale signs.  I mean,  Itty Bitty exhibited everyone each of the aforementioned symptoms except for the rash.  It wasn’t until we saw a little slit in his bottom gum that we realized what was torturing our poor little babe.  I feel bad because he was so miserable.  But, at least he wasn’t eating my brains.  Yet.

Wish us luck, as we enter into this wonderful world of teeth!