Just when you think you have a handle on ,how to care for your new baby – suddenly, they’re six months old and now you’re nose deep in the process feeding them solid foods.  WHAT?!?  You gotta be kidding me, right?  I wish.

As if finding the perfect bottle, or learning how to breastfeed wasn’t crazy enough – now you get to deal with real people foods, and real-smelling poop.  ::gag::

But, between you and I, in spite of the real crap smelling crap coming from my baby, introducing solid foods has been incredibly fun for our family. 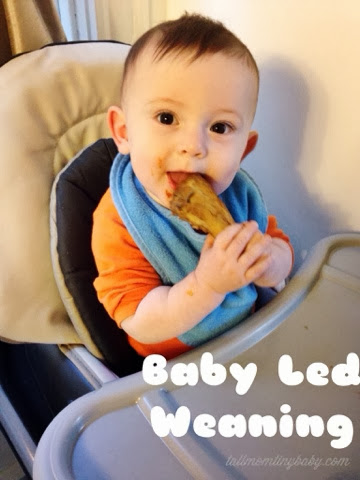 Since the 1950’s or so, parents traditionally have started solids with their babies by feeding them pureed mush via a spoon.  Starting with rice or oatmeal cereal more often than not, moms and dads then graduated their little ones to pureed veggies, fruits, and meats. Naturally, the parents were often in control of how much the baby ate.  Which, makes sense, right? 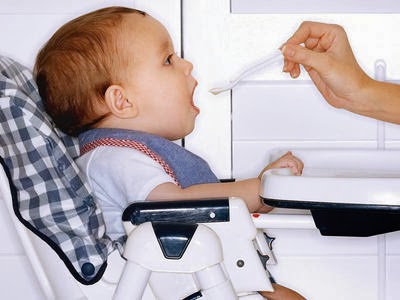 Well, much to Tall Dad’s dismay, we never do anything by the book in this family.  One of the unconventional (fine, ok, call it hippie if you must) routes we’ve undergone, is to ditch the purees for the most part, and feed our Itty Bitty mostly by Baby Led Weaning.  Which, of course, is the reason why I said earlier, despite the real poop, giving our baby real food has been a lot of fun.

What exactly is Baby Led Weaning (referred to as BLW)?

Baby Led Weaning (in it’s purest form) means you allow your baby to feed him or herself from the get go.

Well around six months or so, babies love to grab things and put these things in their mouths. Instead of just giving them a teether toy, you sit your baby in their high chair, lay out some large pieces of food, and let them experiment.  In the beginning they will not necessarily INGEST a lot of food, but they will get a sense of how food feels, smells, and tastes.  Tall Dad used to hate this – he never saw the point if the kid didn’t actually eat all of the food.  “It just causes a huge freakin’ mess” he used to say.  And, yes, while it isn’t the prettiest of methods, you can take the appropriate measures to mitigate a real disaster. (more on those ideas to come :))

Ideally, you want your baby to be “eating” during meal times with the rest of the family, and even better yet, BLW purists believe that you should be feeding your baby the SAME food that you are eating.

“I won’t give my baby pepperoni pizza!” you say!
“There’s no way my kids having my $5 Dragon Roll from (insert favorite sushi place here)” you protest!

True. Ok, so, maybe it means you cook some healthier meals for yourself. Or, if you are out, or ordering takeout, be sure to get some steamed veggies or other items your baby can eat. 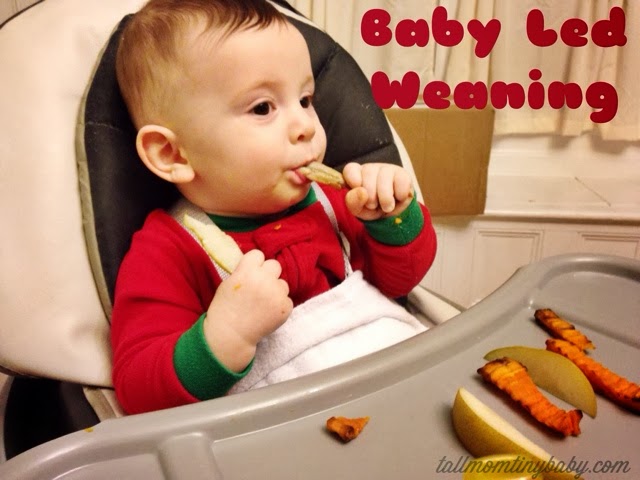 It’s a lot to take in, especially because most people were raised eating purees.  And, let’s be honest, purees are easy.  They clean up well, they’re quick, and your kid gets most of the nutrition he needs in one quick feeding.  Best of all, purees are safe.  When I tried to explain BLW to my parents, they freaked out.

Their main concern was choking.

Completely legitimate in their fears, choking is totally scary.  But, I learned that babies need to experiment with food in their mouths, and that they have a great natural instinct to gag and spit out any pieces of food that are unsafe for them. Babies who learn to eat solid solids (not pureed solids) from a younger age actually learn how to chew and break apart food into safe pieces much earlier than those who slurp purees for months.

I know, I hear the outcries of “BULLCRAP!” reigning down from all over the world as you read that last paragraph.

Seriously, I do.  In fact, I was of the same opinion, until I saw my tiny baby, without any prior experience, gag out a giant piece of mango and be totally fine.   Granted, I nearly had some crap smelling crap come out in my pants as I watched him figure out how to get the mango out of his mouth, but he did it and has done it multiple times since then.  Best yet, because of his experience with BLW, he now honestly knows to take smaller, easier to handle, bites, chews, and swallows.

Alright everyone, say it with me now, “SCHOLARSHIP!” No, seriously, say it.  He’s wicked smaht 🙂

There are BLW purists, those who do hybrid versions along with some pureed foods (like myself), and others that dabble in BLW without even knowing it.

I hope this helps clarify what Baby Led Weaning is all about. I’ll be posting some more experiences, recipes and videos for you to help you see how we have been feeding Itty Bitty all of these months!


I’d love to know if any of you have had experience with BLW.  Please leave a comment below 🙂

4 Comments on What Is Baby Led Weaning